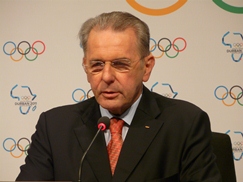 (ATR) IOC President Jacques Rogge says he will not play favorites in the contest to succeed him in two years. Rogge spoke in Durban, South Africa in the closing press conference for the IOC Session held this week.

"I will absolutely not groom anyone or support anyone. I’ve never done that for elections to the Olympic Games, election to the Executive Board and I will continue to do that," he said.

Without mentioning any names, Rogge says a half-dozen IOC members are qualified to take his place when he steps down in 2013 after 12 years in office.

Whether that many will put their names forward come election time, he says, remains to be seen.

Rogge added that he firmly believes the IOC is in "a safe and sound position" two years out from the impending leadership change.

"If I were to disappear today or tomorrow, my successor could take over immediately," he said.

Among the members mentioned as possible successors are Thomas Bach of Germany, Richard Carrion of Puerto Rico, Ser Miang Ng from Singapore, Sergey Bubka of Ukraine and Nawal El Moutawakel of Morocco.

Rogge named the election of PyeongChang to host the 2018 Winter Games as the most important decision taken this week by the IOC.

"The Koreans have been rewarded for their patience, their perseverance and maybe also because of their program of new horizons," he said.

"The three bids were very close to each other in quality, but definitely these arguments probably made the difference."

Asked about preparations for London, Rogge says he is satisfied with the work taking place and that there should be no surprises in 2012.

"They have been exemplary," he said.

"It’s a very good preparation taking into account the very difficult economic and social situation into which the world has been plunged, so hat’s off for that."

Rogge also rejected complaints from Londoners that tickets for the 2012 Games are too expensive.

"The people have applied for 22 million tickets knowing the price," he said.

"I think that LOCOG’s proposals were fair, I think they were absolutely responding to what the market is ready to give, and I cannot avoid saying that ticket sales are important for the budget of the organizing committee."

No Changes to Age Limit for Mario Vazquez Rana

There apparently will be no changes made in IOC rules that would allow for Mario Vazquez Rana to remain on the Executive Board when he reaches IOC retirement age 80 next year. Vazquez Rana, who leads the Association of National Olympic Committees, had asked the IOC president to consider some accommodation that would allow him to stay on the EB until his ANOC term is over in 2014.

After his reelection last year at the ANOC Assembly, delegates endorsed a resolution calling for the IOC to bend its rules to allow their leader to stay on the EB to finish his term.

But Rogge said in Durban no exceptions will be made, even for the powerful Vazquez Rana.

"No, there will be no changes in the age limit whatsoever," said Rogge without equivocation. Last year he had said that the request from ANOC would be studied.

Rogge offered encouragement for South Africa to launch a bid for the Olympics. While 2020 may not be an option after the government ruled-out a bid, the IOC president thinks South Africa is ready to raise its hand for the Games – one day soon.

"You have proven in the FIFA World Cup that you are ready for a major event," he said. "You are ready to host the Olympic Games, but it’s up to you to decide when."

Rogge added that he respects the government’s decision to tackle basic services before the Games but that he’s been reassured by South African politicians, including president Jacob Zuma, that the ambition to bid is there.

Written and reported in Durban by Ed Hula