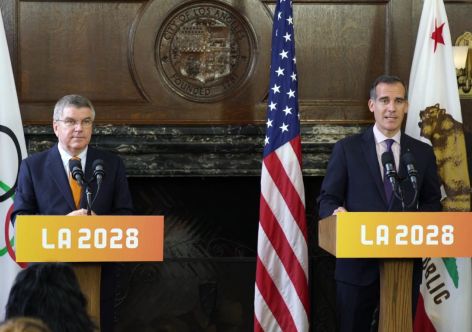 "[LA] Mayor Garcetti and I, we were at the meeting of the world NOCs in Doha, Qatar. It was about 115 degrees Fahrenheit and 120 percent humidity and we walked along the sea and discussed the procedure and were discussing some ideas," Bach told reporters in LA following the approval of the LA 2028 Summer Games at the IOC Session in Lima, Peru.

Bach said the idea was first given to him by United States Olympic Committee president Larry Probst while the two were in New York City.

"Larry Probst, the president of the USOC had given me this idea of the double allocation a couple of weeks before [Doha]," Bach said. "I don’t know if Eric [Garcetti] or Casey [Wasserman] had sent him to start talking with me about this over some spaghetti in New York, but I wanted to test the waters a little bit with Mayor Garcetti.

After his meeting with Probst, Bach decided to test the waters with Mayor Garcetti on the sidelines of the ANOC General Assembly in Doha, Qatar in November 2016.

"It was just to evaluate whether such a double allocation could work with the city of Los Angeles or whether LA would say ‘no way, we want to go to the bitter end’."

During the assembly in Doha, the 2024 bid committees for Budapest, Paris and Los Angeles delivered presentations to the National Olympic Committee and International Federation leaders in attendance. Budapest 2024 attempted to present an idea of an alternative to the mega-city Olympic concepts put forth by LA and Paris, emphasizing that a mid-size city could provide a new Olympic model for cities around the world.

Budapest would remain in the race until February 2017. Bach's comments seem to show the IOC had counted on LA 2028 before Budapest's withdrawal.

"I had a press conference after an IOC Executive Board meeting so I wanted to test the waters not only with LA, but all the stakeholders so I threw the stone into the water," Bach said. "We kept in contact then over Christmas and New Year."

At the December press conference, Bach said for the first time publicly that the Olympic bid procedure produces "too many losers."The comment was the first hint of the possibility that the IOC could consider awarding two Olympic Games at once.

Bach said the trust he established with Garcetti in Doha helped fuel his desire to create a win-win-win situation for LA, Paris and the IOC.

"This for me was the moment when I got to know a man who I and the IOC can trust. Without this trust it would not have been possible to bring the Games back to LA.

The LA 2028 Summer Games will be the third edition held by the city staging the Olympics in 1932 and 1984. The Los Angeles Memorial Coliseum will become the first venue to stage three Opening Ceremonies.

Bach visited the Coliseum during his LA visit where he and Olympian Rafer Johnson reignited the Olympic Cauldron as Johnson did during the 1984 Games.

"It took me back to those 1984 Games when I was a 13 year old with my family, watching amazing athletes come to my city, set world records and celebrate what this town was all about," said Mayor Garcetti, reflecting on what he has repeatedly described as his motivation to bring the Olympics back to LA.

With artful negotiations by Garcetti, LA 2028 and the USOC, Garcetti was able to achieve his goal.

"Without this trust it would not have been possible to bring the Games back to LA," Bach said. "We are happy they are back and we are extremely happy for the future athletes of the world to have this great opportunity to have this great competition in this wonderful city of LA."