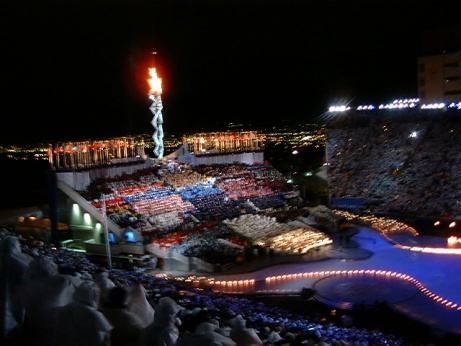 (ATR) Fraser Bullock says Salt Lake City is getting ready for a chance at an Olympic encore. The former COO of the 2002 Olympic Winter Games tells Around the Rings that he expects movement "in the near future" towards a bid for the 2030 or 2034 Games.

Bullock spoke to ATR at the annual assembly of the U.S. Olympic and Paralympic Committee in Colorado Springs last week.

"I anticipate that in cooperation with the USOPC, Salt Lake City will have a dialogue with the IOC in the next six months," Bullock says. Salt Lake City has already been selected as the choice of the USOPC for the next Winter bid from the U.S.

But USOPC chief executive Sarah Hirshland said last week while Salt Lake City is the chosen one, both the bid city and the USOPC will wait for the IOC to declare its readiness for new winter bids before moving forward.

"There’s clarity and transparency that’s occurred between us and the IOC," says Hirshland. "But at this point there is not a process for us to be engaging in any meaningful way. So when that time comes, if it’s appropriate and we make a determination that a bid is in the best interests of our team and organization, then we’re prepared to do that".

Bullock believes the groundwork that’s gone into a new bid from Salt Lake City will fit well with the new process of the IOC for Olympic bids.

"We’ve done a lot of work already. We’ve done our Olympic exploratory report. We continue to refine plans. But we’ve done it before. We’re ready. So we feel prepared for being a future host," says Bullock.

Salt Lake City and other potential bidders for the next Winter Olympics to be selected by the IOC, 2030, will need to wait until IOC President Thomas Bach names the permanent commission which will handle winter bids. The new commission along with one created for summer bids, are part of the new process the IOC says it intends to follow for selecting host cities.

So far the only other known city with an interest in the winter games is Sapporo, Japan.

Built upon collaboration and flexibility, the new process takes the place of the sometimes raucous and expensive head-to-head bidding campaigns. The IOC is keen to work with cities and regions tocreate Olympic plans that fit the city rather than contort a city to fit the games. The low-key collaborative process is also meant to win public and governmental support for bids, a number of which have faltered in recent years with referendum defeats or government shut down.

Bullock assures that will not be the case in Salt Lake City.

"That’s really our greatest strength. We conducted a public poll that showed that we have 89 percent support to host the games. 89 percent. That’s almost a mandate. Other places may struggle it’s to pass a referendum, we are overwhelmingly positive. Salt Lake City loves the Olympics," he says.

Under the new IOC protocol, if a referendum is needed to back an Olympic bid, the IOC may not accept a candidature unless that vote has already been cast in favor of hosting the Olympics.

Bullock says no construction will be needed for a second Winter Games in Utah’s capital city. Venue such as the speedskating oval and various arenas for a sports all remain in constant use and are well maintained.

He says the Olympic Village at the University of Utah has been expanded since 2002 when it played the same role.

Bullock says Salt Lake City is also ready for events that have been added since the 2002 Games.

"We have many new disciplines. We have slope style, we have big air. We have skateboard cross we have snow cross. We’re talking about having big air in downtown Salt Lake City. To mix it up, make it exciting, maybe we have an outdoor hockey game at Rio Tinto stadium," Bullock says.

Among the other improvements is a new airport which he calls "state-of-the-art". First phase of the new facility will open in 2020.

In Park City, the Utah Olympic Park which hosted sliding events and ski jumping, has a brand-new housing complex for athletes who come to the park for training. Bullock says the new accommodations are in the price range of $50 per night.