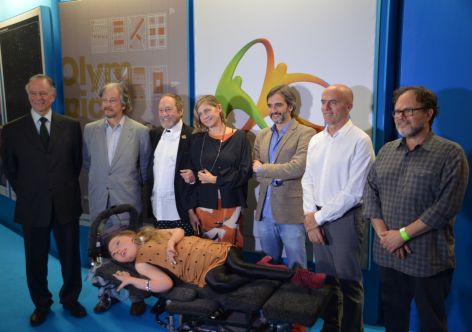 (ATR) Rio 2016 Director of Culture Carla Camurati tells Around the Rings the Olympic poster set is a fantastic representation of art for the Games.

In a break with tradition, Rio 2016 commissioned 13 posters to be on display during the Olympic Games. Twelve of the artists commissioned were from Brazil, with one being from Colombia.

"They are all so different, and the colors that we have are the Brazilian colors and we have artists from every region of the country, and I think we have a really beautiful collection," Camurati said to ATR. "In reality what we wanted was to have a big representation, so we asked our principal museums to select important Brazilian artists at this moment and invite them [for the project]."

On July 18 the posters will be on sale in Rio 2016 stores around the city, in two sizes. The smaller posters will retail for $9, while the larger prints will go for $15. A total of 15 posters are available, the 13 commissioned for the project and two additional postures featuring the Rio 2016 Olympic and Rio 2016 Paralympic logos.

Gustavo Greco, one of the artists featured in the collection told ATR it was important for Rio 2016 to include as many artists as possible to showcase the wonderful art and culture Brazil has to offer, even in this time of political and economic crisis in the country.

"It was amazing [to be included] because I realized that I would be part of this huge Olympic archive," Greco added. "It has been done for many editions of the Olympics, so this is the Brazilian one. There is a huge emotional [aspect] to be part of it."

Click here to see a gallery of all 15 posters.