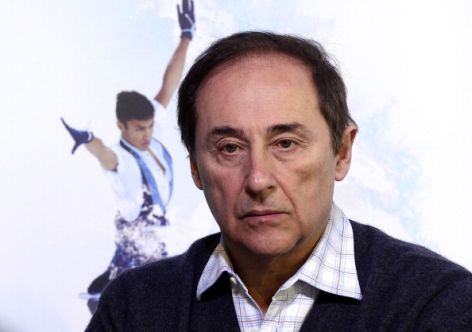 Didier Gailhaguet, president of the French Ice Sports Federation, attends a press conference at the French House in Sochi on February 7, 2014 on the sidelines of the 2014 Sochi Winter Olympics. AFP PHOTO / FRANCK FIFE (Photo credit should read FRANCK FIFE/AFP/Getty Images)

(ATR) French ice skating federation president Didier Gailhaguet says he will run for the presidency of the International Skating Union (ISU) in order to bring the federation "into the modern age."

"This is a particularly enriching experience for me, as the opportunity to listen attentively to the people that make up the ISU has in large part enabled me to develop a manifesto for bringing the ISU into the modern age, accompanied by a programme of actions that stems from it," said Gailhaguet.

Gailhaguet is most well known for being directly involved in the judging scandal at the Salt Lake City Winter Olympics in 2002. Gailhaguet was accused by fellow judge Marie-Reine Le Gougne of pressuring her to award the gold to Russian skaters that had made a clear technical error in their final run.

As a result of the investigation into the allegations, both Gailhaguet and Le Gougne received three-year bans from the ISU. Gailhaguet was welcomed back into the sport and the French ice skating federation in 2007.

The scandal resulted in current ISU president Ottavio Cinquanta initiating changes to the judging and scoring systems.Cinquanta is stepping down as president once a successor is elected in 2016 after leading the organization since 1994.

Gailhaguet is currently the only candidate to put their name in the hat as a potential replacement to Cinquanta. The election will take place in June 2016.

Keeping in line with Olympic Agenda 2020 reforms that focus on the sustainability of sports and events, the International Hockey Federation (FIH) has launched a turf quality program to ensure hockey fields are in good quality for all levels of competition.

The program focuses on providing sustainable, affordable and accessible fields worldwide to players of all ages. The quality-assurance program outlines standards for the performance, construction and durability of hockey turf.

The FIH will recognize certified manufacturers, field builders and preferred suppliers, allowing for an event to specify products are FIH approved and carried out through a specialist contractor.

The new program is an integral part of the FIH’s 10-year development plan dubbed the Hockey Revolution that aims to inspire a new generation of hockey players.

The Liebherr 2016 Men's World Cup for the International Table Tennis Federation (ITTF) will be played in Europe for the 12th consecutive year.

The tournament will be hosted in Saarbrücken, Germany from October 1-3, 2016, marking the third time the event will take place in Germany.

"We hope for a full house on all three days. Spectator interest in the region is enormous; the tournament starts on a Saturday and concludes on Monday, the Day of German Unity, a public holiday throughout the country," said Michael Geiger, president of the German Table Tennis Association.

Only 20 of the best men’s table tennis players in the world qualify for the annual event.

20 Years at #1: Your best source of news about the Olympics is AroundTheRings.com, for subscribersonly.