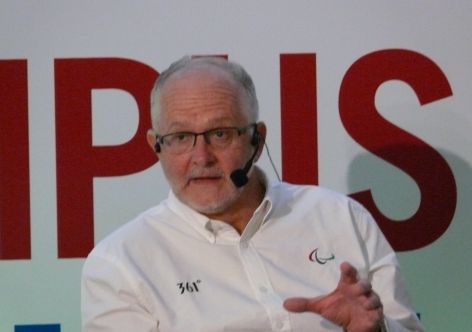 (ATR) International Paralympic Committee president Philip Craven says the growth of the Paralympics is benefiting the lives of millions of people across the globe.

Craven kicked off the IPC Campus Academy Inclusion Summit hosted in conjunction with the World Academy of Sport in Rio de Janeiro Thursday citing examples of how host cities benefit from staging the Paralympics.

"Exposure to high performance Paralympic sport leads to seismic shifts in attitudes and perceptions," says Craven. "The Games can change how a city, a country and a continent think about impairment."

He says the best example of these shifts in perception came after the London 2012 Paralympics, which changed the attitudes of 20 million people about people with disabilities.

"The Paralympics can also benefit the development of the host nation’s team and lead to greater investment in both the public and private sector," Craven adds. "Brazil has had steadily increasing performances and could hang on to the fifth position at these Games."

Host of the Inclusion Summit Chris Holmes – Britain’s most successful Paralympian with nine gold medals – tells Around the Rings the attitude shifts help more than just those with impairments.

"These events are so important because they demonstrate the Paralympic Games aren’t just about sensational world-class sport, but it’s about the change that can be driven through that sport," he said."Change in society which doesn’t just offer access and inclusion for disabled people, change which benefits every single member of society."

That's the theme of the Inclusion Summit now in its third year – creating a more inclusive society. Holmes introduced each of the speakers who described how future host cities and countries around the world can further drive social inclusion.

Charlotte Nhlapo, global disability advisor for the World Bank, described many of the barriers to social inclusion in today’s society and how the Paralympics can help eliminate some of them.

President of the Olympic Municipal Company in Rio, Joaquin Montero, spoke on behalf of Mayor Eduardo Paes. Montero told the summit that Rio was awarded the 2016 Olympics and Paralympics because of the challenges and opportunities it presented to help change the country.

"We are reinventing the city," Montero said. "For each real we spent on venues, we spent five reals on legacy projects such as mobility, accessibility and infrastructure projects."

Representatives for the Tokyo 2020 and Beijing 2022 Games spoke about the programs they will use in the lead-up to the events to make life better for people with disabilities.

"The Tokyo 2020 Paralympics will be the greatest ever," says Tokyo 2020 senior director of general coordination Eiichirou Kodama. "We will create a barrier-free environment throughout Tokyo. We have been promoting the Olympic and Paralympic values in our public schools since April."

President of China’s National Paralympic Committee and Beijing 2022 executive president Zhang Haidi says the city's Winter Games will be of "equal splendor" and build off the tremendous success of the 2008 Summer Games.

"Uniting persons with disabilities and other members of society, the Beijing Paralympics fully embodies the motto of ‘one world, one dream’ and highlights the Paralympic ideals of transcendence, integration and equality," says Haidi.

"Beijing 2022 will enable Chinese society to achieve greater progress, bring more benefits to China’s disabled citizens and create a warmer and more friendly world for the persons with disabilities across the globe."