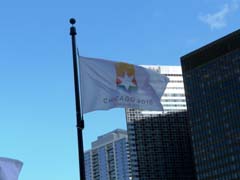 Chicago 2016 chairman Patrick Ryan at the podium, Mayor Richard Daley seated. (ATR/Panasonic:Lumix) (ATR) The head of the Chicago bid for the 2016 Olympics says his team won’t be deluded by the praise heaped upon them Tuesday by the chair of the IOC commission reviewing the bid.

Nawal El Moutawakel called the city "vibrant," its preparation "highly professional" and the public interest "massive." She delivered her assessments at the conclusion of a five-day visit.

"We felt it went well, but we're not assuming anything. We're just going to keep working very, very hard, and keep going up to the finish line on Oct. 2."

Ryan said the commission asked for clarifications of certain things, but did not specify what they were.

"They asked challenging questions, we gave good answers," he said. "They asked for some clarifications of certain things, we've given them, now they'll evaluate it."

The IOC commission is believed to have received the replies from Chicago before the staff left the city Wednesday. While members of the commission may have scattered to regroup next week in Tokyo, the draft of their report on Chicago is already finished, pending the additional information requested.

In each candidate city, the panel works each day to summarize and comment on what they have seen and heard.

"They didn't like the weather Sunday afternoon," Ryan said of the 10-hour venue tour that included rain and some snow.

Despite the weather, he says the venue tour accomplished its goal. "We've been showing them photos of the city, videos and now they saw it live," Ryan said. "They could see really how compact it is ... they could go to Northerly Island and watch beach volleyball and walk over to Shedd Aquarium and see Beluga whales."

Gilbert Felli, the IOC executive director for the Olympic Games, said in his remarks that "one of the values of the Olympic Movement is to give hope to the people."

Ryan said that President Barack Obama's campaign slogan, "Yes We Can" also is about hope. Obama, a Chicago resident before moving to the White House, pitched his hometown in a videotaped message to the Evaluation Commission.

"We have to do more than hope as a candidate city," Ryan said. "We have tough competitors, so we said, 'Oh yes will.' We will deliver on our commitments to you, we will deliver and there's the collective will and the relationships from city hall to the statehouse to the White House.

Although Chicago 2016 has a stronger partnership with the U.S. Olympic Committee than any previous bid committee, the top USOC leadership was not present at the closing press conference.

Larry Probst, chairman of the board, and Stephanie Streeter, acting CEO, had appeared during presentations to the commission, but left the official duties Tuesday evening to Bob Ctvrtlik, vice president of international relations.

IOC members Anita DeFrantz and Jim Easton of the U.S. also were not present at the closing press conference.

Felli and other unidentified representatives met with leaders from the Bronzeville neighborhood, who have concerns about the impact of the Olympics on their homes, as well as protesters from the group No Games Chicago Nawal El Moutawakel and Gilbert Felli. (ATR/Panasonic:Lumix) who think the money spent for an Olympics should instead go toward schools, transport and improving the lives of citizens.

Felli said someone from the city was part of the group meeting with the Bronzeville residents "and probably this will be addressed," he said.

However, he said appeasing No Games Chicago "is a bit more difficult. They have various requests on the subject.

We have been listening to them. It's important for the city to understand the concerns of the people and I'm sure the mayor and municipality are listening to them and why they are not in favor of the Games."

He said the city also understood the concerns about affordable housing and economic opportunity.

Bob Quellos, one of the protesters who met with the IOC, told local media that the committee was open to their views.

"We made our point, simple and clear," Quellos said. "They were very kind and friendly to us, and they welcomed everything we had to say."

Philip Hersh of the Chicago Tribune gushed that the commission gave rave review.

"Listening to the top two officials of the International Olympic Committee's evaluation commission deliver a relentlessly upbeat assessment of its trip to Chicago, you would think there is no need for them to visit the other three finalists for the 2016 Summer Olympics," Hersh wrote.

"Or that you were hearing commission chairwoman Nawal El Moutawakel of Morocco sing 'Home on the Range,' for there was seldom heard a discouraging word at the Tuesday news conference that ended the panel's visit."

For general comments or questions,