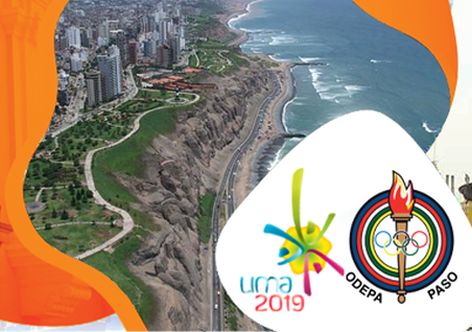 (ATR) Leaders of PanamSports meet in Miami this weekend to hear the latest update on construction for the 2019 Pan American Games in Lima.

The Executive Committee of PanAm Sports, formally and formerly known the Pan American Sports Organization, has a full agenda when it meets Sunday and Monday, Secretary General Ivar Sisniega tells Around the Rings.

"We will review many issues and among the main ones is a report from the Organizing Committee of the 2019 Pan American Games in Lima," said Sisniega.

Carlos Neuhaus, president of the Lima 2019 organizing committee, will bring a team of colleagues from the Peruvian capital to brief PanamSports leadership. The two commissions from PanAm Sports overseeing the work in Lima will also be reporting.

Construction of the Pan Am Village has yet to begin, the biggest project for these Games, providing the highest level of concern. The winning bid for the village won’t be announced until Sep. 8, with construction work to begin within days perhaps. The seven companies bidding for the project will have less than two years to complete construction.

Oversight of the Lima 2019 has grown sharper since the April election of Neven Ilic as president. The owner of a construction company in Chile, Ilic brings professional know-how as well as his sport background to the task ahead for Lima. He will lead a meeting of the executive committee in Lima Oct. 10-11 to get a firsthand view of the situation.

Sisniega says the Miami meeting will also review the contract for the 2023 Pan Am Games. Santiago, Chile is the only city to bid. Plans are being made to cast a vote and sign the contract when the Pan Am NOCs meet Nov. 4 in Prague at the conclusion of the annual General Assembly of the Association of National Olympic Committees.

"We will also have reports from the Marketing Commission to review the new PanamSports image as well as strategies to attract sponsorships," he says.

"Equally among the most important issues will be the analysis of the new commission of development of the sport from which we will study new ways to improve the sports level of America, including the possibility of doing our own Pan American Youth Games," he said.

Sisniega was the creator in 1996 of the National Olympiads in his native Mexico, a project that he has been defending against government cuts. An Olympian in modern pentathlon, Sisniega has been a leader in the International Federation as well as PASO.

The meeting in Miami comes after weeks of travel by Ilic and Sisniega to the NOCs to learn more about the needs of each heading into the next Olympic cycle. Ilic arrives in Miami with a nomination to serve on the IOC as the PanamSports president. He faces a near certain vote of approval Sep. 16 at the IOC Session in Lima.

That Session is also expected to confirm the return of the Olympics to the Pan Am region by approving Los Angeles for the 2028 Olympics.

Reported and written by Miguel Hernandez and translated by Ed Hula.