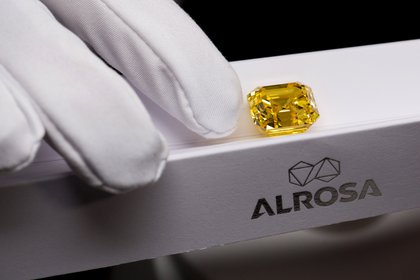 The largest stone in the exhibition was a deep yellow asscher cut diamond, weighing 20.69 carats. It was cut from a raw crystal with a rare honey hue, which weighed 34.17 carats and was the largest yellow diamond mined in Russia in 2017. Moscow, Russia, February 13, 2019. ALROSA Exhibits Largest Pink Diamond in Companys History. ALROSA, the biggest diamond producer in the world, has conducted a media preview of the collection of large coloured diamonds, including unique pink, bright yellow and pink purple gems.

Alrosa joined its biggest rival De Beers in increasing prices this month as the diamond industry rebounds from a pandemic-induced standstill in the first half of 2020. “Abnormally” high sales of $521.6 million last month underlined a strong demand recovery in key U.S. and Chinese markets, Alrosa Chief of Sales Evgeny Agureev said in an interview on Thursday.

“The favorable market situation helped us to correct prices upward in the January session as it was clear in December that the majority of clients were ready for an increase,” Agureev said.

Sales this month should be close to normal and, without additional shocks, there is a chance that historical trends will reassert themselves in 2021 as buyers adjust to post-pandemic realities, Agureev said.

“People have not only learned to work remotely, but also to buy online, including diamonds,” he said.

Alrosa wants to ensure that it sells customers only the rough stones they can quickly process into polished gems and sell. That approach is helping to trim client inventories, while the company’s own diamond stocks have also declined, according to Agureev. Alrosa held 20.7 million carats at the end of 2020, down from 22.6 million at the start of the year.

After suspending minimum purchase requirements for customers last year, the company may reintroduce them when it signs new three-year deals in April. Alrosa once stipulated that clients must buy at least 80% of the rough stones they were contracted to purchase, but later this share declined.

“We just need to distribute the volumes well, based on the real needs of customers,” said Agureev without elaborating on the future level of minimum purchases.

Alrosa retains an option to sell gems into Russian state stockpiles, a measure approved by the government last year to shore up the market.

“Such sales are not necessary now, but if the market situation changes, then it may be needed,” Agureev said.

The company’s 2020 revenue declined almost 16% to $2.8 billion from the previous year, it said on Thursday.