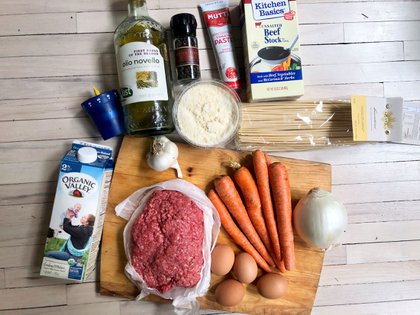 Note that part of the prep setup includes a timer, at left. Photographer: Kate Krader/Bloomberg

(Bloomberg) -- Editor’s Note: As more people are working from home, Bloomberg Pursuits is running a weekly Lunch Break column that highlights a notable recipe from a favorite cookbook and the hack that makes it genius.

In the seemingly infinite world of instant pasta dishes, some dishes are off-limits.

Namely, Bolognese sauce. The recipe, which is much more of a meat ragout than a sauce—name notwithstanding—depends on hours of cooking to break down the ingredients and quietly push them together to form a happy, concentrated mix. Such experts as the late Marcella Hazan allow for a minimum of three hours for it to simmer. Feelings about what the dish is and how it’s served are strong enough that on a 2019 visit to London, Bologna’s mayor Virginio Merola posted a picture of a local spaghetti Bolognese with the caption “fake news.” (He was objecting to the spaghetti; purists believe it demands thick strands of pasta to hold the sauce.)

Matty Matheson is a rule-breaker. The well-tattooed Canadian chef, who caused a sensation as a star on Vice Munchies cooking show and is now beloved for his YouTube cooking videos, does have respect for the classic version.

“My Italian mother-in-law makes Bolognese,” he says. “I know how to do it; it’s a labor of love.” But he believes that there are times when you’re not into “that full-on, all-afternoon Bolognese lifestyle” and want other options.

In his latest book, Matty Matheson: Home Style Cookery (Abrams Books; $35), the chef offers a recipe for one-hour Bolognese. In the headnote, he writes “Bolognese is a house-to-house dish: every person in every town in Italy has a ragù, sugo, or bolo, and this is my fast and easy one-hour take. You could make it a few different ways, but one thing you should keep constant is that it should be saucy, like sludge in the best kind of way.”

His book is filled with entertaining-to-read and entertaining-to-consider recipes like this one that echo his unstoppably boisterous shows. Whether they all constitute ‘home cookery’ is another question. Among the 130-plus recipes that constitute home cooking for him are “molasses bread in an apple juice can,” the world’s tallest seven-layer dip, and lobster thermidor with salt and vinegar chips.

Matheson, who also owns the Toronto restaurants Matty’s Patty’s Burger Club and Maker Pizza, traces the origins of his fast Bolognese to a lasagna video he made for Munchies several years ago. “I was frustrated because the Bolognese was taking so long. So I said, ‘Watch this, I’m going to blast it, reduce it all the way down, then loosen it up by hitting it with some fat.’”

Specifically, Matheson adds egg yolks, which gives the sauce an almost instantaneous unctuousness and creaminess. “It’s a weird little cheat,” acknowledges Matheson. But, he says, “I’ve always been a fat kid. I like butter and I like egg yolks, and this makes sense to me. It rounds it out.”

He adds: “It’s big-risk, big-reward dish. I know this is sacrilegious, but I know the rules, and if you know them, you can break them.”

Fat can perform miracles in cooking, and this Bolognese is surprisingly complex and full-flavored. The recipe calls for an eyebrow-raising one pound of carrots, but they are there to give the sauce an underlying sweetness, while the fast blast of heat concentrates the flavors and makes a sauce that’s thick enough to bathe the pasta.

A further detail that will get people’s attention: In the book, Matheson calls for 2 pounds of ground beef to make a sauce that serves four people. “Canadian portions,” laughs Matheson. (The recipe below offers the option to serve six.)

Here’s the money question: Is it really a one-hour Bolognese? I dutifully set my timer and started peeling carrots. An hour later, the sauce was still simmering down. If I’m being honest, I would call it One and One-Quarter Hour Bolognese. But if you don’t count the chopping, you might just be mixing the sauce with the pasta when the timer goes off.

Stirring constantly, add a few spoonfuls of the hot sauce to the egg yolks to temper them, then stir the mixture back into the pot until glossy. (If you don’t, your sauce will be studded with bits of cooked egg.) Add the pepper and season with salt.

Meanwhile, bring a large saucepan of heavily salted water to a boil. Throw in the pasta and boil until al dente. Strain in a colander, reserving 1⁄2 cup of the pasta water.

Add the cooked pasta to the pot of Bolognese and stir until it is coated in sauce. Adjust the consistency as needed, using the reserved pasta water. Using tongs, twirl a portion of the noodles into a tight bundle and transfer to a serving plate. Repeat until the desired number of servings. Spoon the remaining sauce evenly onto the plates. Sprinkle with the cheese and serve.