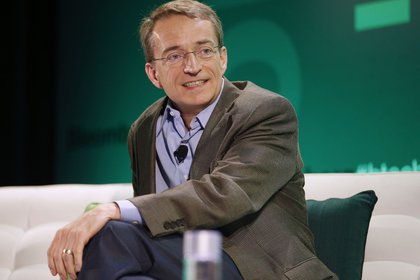 (Bloomberg) -- Even after he left Intel Corp. in 2009, Pat Gelsinger couldn’t stop talking about the company he’d worked at since he was a teenager.

When asked about the chipmaker, he would regale listeners with stories of how his mentor and former Intel boss Andy Grove had shaped him. Now, back as chief executive officer, Gelsinger has the chance to re-establish a leadership approach that made Intel the dominant chipmaker, while bringing lessons learned elsewhere to help the company recover from its biggest crisis in at least a decade.The 59 year-old rejoins as the company confronts rivals selling better products and big customers developing their own semiconductors. His main challenge is to fix Intel’s manufacturing stumbles, which former CEOs Bob Swan and Brian Krzanich failed to do.

Unlike Swan, Gelsinger has the technical know-how and deep inside experience that he’ll need to pull off a turnaround at Intel. As a former chip designer, Gelsinger understands the complex engineering that goes into Intel products. And as the former CEO of VMware Inc., he has embraced a cloud-computing boom that is reshaping Intel’s most important market.

“Gelsinger is a darling for investors and was in our conversations the most-wanted next CEO for Intel,” said Chris Caso, an analyst at Raymond James & Associates. “He is at the same time an outsider -- coming from a much smaller and agile organization which has been successful in the last couple of decades at creating a new ecosystem and set of industry standards with multiple fundamental innovations -- and an Intel veteran.” Intel shares jumped 8% and VMware fell 7% after the leadership change on Wednesday.

Around 2006, Gelsinger was the leading technical voice communicating a new Intel strategy to bring chip designs or updated manufacturing technology to market every year -- a quicker pace than before. The need was pressing because rival Advanced Micro Devices Inc. was catching up, gaining a quarter of the lucrative market for server chips, up from almost nothing a few years earlier.

At the time, Gelsinger dubbed this new, relentless cadence of technical updates “Tick Tock.” The strategy worked, banishing AMD back to less than 1% share of the server chip market a few years later.A devout Christian who wrote a book about balancing faith, family and work, Gelsinger was molded by Intel. He joined the company in 1979 as an 18-year-old just out of technical college and went on to design part of Intel’s most important chip, the 8086, as he studied for a higher degree part time at Stanford University.

He worked his way up the ranks in a company that developed leaders by moving candidates around to give them experience of multiple aspects of its operations. It was in his role as Intel’s first chief technical officer that he rose to prominence as a gifted evangelist for the company’s innovations and vision of where computing was headed.Like Grove was, Gelsinger is capable of doling out intimidating verbal lashings when he feels those reporting to him are trying to avoid a problem or are not giving him honest answers, according to people familiar with his style. He makes time for all levels of employees who come to him for advice, the people said.Gelsinger applies the same candid judgment to his own career. After he left Intel, he frequently pointed to technological decisions made under his watch that had gone awry and told people he was pushed out when it was made clear he was not in line for the top job.

After leaving Intel in 2009, Gelsinger joined data-storage provider EMC Corp., where he became a candidate to replace CEO Joe Tucci, who planned to retire. Instead, Tucci opted to stay and Gelsinger ended up as CEO at VMware, which was majority owned by EMC at the time. When Dell Technologies Inc. bought EMC, it also gained that company’s ownership of VMware.At VMware, Gelsinger faced twin challenges. The market for its main product, software that lets multiple workloads run on a single server, was maturing. Meanwhile, the company’s relationship with Dell was in constant flux through a series of reorganizations.

Trying to fire up stalled growth, Gelsinger came up with several strategies before settling on a plan that closely allied his company with Amazon.com Inc.’s leading cloud service. The internet giant cooperated with VMware to win customers who wanted to run applications in the cloud while keeping their own corporate data centers operating with VMware software.

After slumping during the first part of Gelsinger’s tenure, VMware’s shares have soared since early 2016 as revenue growth recovered.

Regaining the trust of leading cloud providers such as Amazon and Google will be a key task for Gelsinger as head of Intel. Those companies, among the biggest buyers of Intel’s pricey server chips, are increasingly designing their own semiconductors and having them manufactured elsewhere. Delays in the introduction of new, faster chips by Intel have contributed to that migration.

Microsoft Corp. is working on in-house processor designs for use in server computers that run the company’s cloud services, Bloomberg has reported. Apple Inc. is also replacing Intel chips with its own silicon for Mac computers.

The biggest challenge for Gelsinger, though, will be to decide on Intel’s manufacturing future. When he left, Intel’s plants had the most advanced production in the industry by combining in-house designs tightly with new manufacturing processes. Now, the company has fallen behind Taiwan Semiconductor Manufacturing Co., which doesn’t design its own chips, but makes them for most of Intel’s rivals.

Read more: Intel Chipmaking Throne Challenged by Taiwanese UpstartSwan, the outgoing CEO, was considering outsourcing more manufacturing as a back up plan while Intel worked on reclaiming leadership with its own production. Other Intel leaders have argued that chip design technology has changed for good and that a hybrid approach of doing some work inside and some outside was the right way forward.

Gelsinger will need to bring clarity to that muddled message, which has left customers and investors confused and doubting Intel’s direction. Last year, Intel stock dropped 17% even as most chip stocks surged.