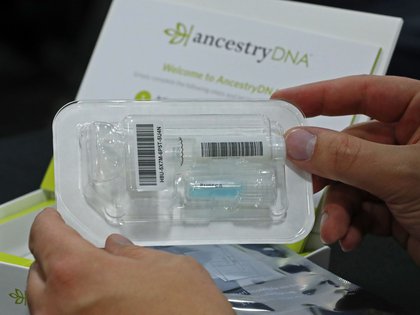 An attendee views an Ancestry.com Inc. DNA kit at the 2017 RootsTech Conference in Salt Lake City, Utah, U.S., on Thursday, Feb. 9, 2017. The four-day conference is a genealogy event focused on discovering and sharing family connections across generations through technology. Photographer: George Frey/Bloomberg

(Bloomberg) -- Ancestry.com LLC is ending a 15-month effort to sell customers genetic insights into their health, the latest sign of trouble in the consumer DNA-testing industry.

Best known for its products that allow customers to explore their family trees, the company launched AncestryHealth in October 2019 in a long-expected bid to compete with 23andMe Inc. and other companies that sell tests that can, for example, show a person’s risk of developing certain genetic diseases. But last year, both companies cut jobs as sales of DNA tests slowed.

On Thursday, Ancestry said it would discontinue AncestryHealth to focus on its family-tree business, a move that will lead to 77 job losses.

“More people around the world are embracing family history to bring their families closer together and build more meaningful connections, and we want to capitalize on this movement and focus our investment on our core business,” Julie Miller, chief communications officer for the company, said in in email.

“In the context of our overall business, short- and long-term investment opportunities and consumer interest, we made the strategic, but difficult, decision to discontinue AncestryHealth,” she said.

Last August, Blackstone Group Inc. said it would acquire a majority stake in the company in a deal valued at $4.7 billion. The deal was completed last month.

The market for genetic tests has expanded on two main fronts: telling consumers about their health and their heritage. Ancestry is the leader on the latter, with more than 3.6 million paying subscribers and more than 18 million people in its DNA network.

But initial consumer interest in DNA testing has appeared to level off. At the start of last year, both Ancestry and 23andMe cut approximately 100 jobs, and smaller firms shuttered among sluggish sales.