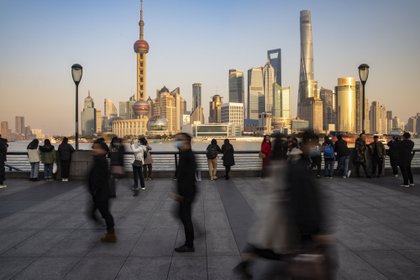 Visitors walk on the Bund in Shanghai, China, on Monday, Dec. 21, 2020. Chinas central bank is striking out on its own with signals of tighter monetary policy, widening a divergence with other large economies that will shape global capital and trade flows next year. Photographer: Qilai Shen/Bloomberg

(Bloomberg) -- China’s banking regulator is strengthening oversight of consumer finance firms with a new annual scoring system, continuing to step up scrutiny as the likes of Ant Group Co. are setting up new units in the industry.

The firms will be scored on how well they manage their corporate governance, risk, capital and information technology, divided into five groups of different levels of oversight, the China Banking and Insurance Regulatory Commission said in a statement on its website on Wednesday. The new rules take effect immediately.

A decade after trials were set up to promote consumer lending, the model is gaining more popularity as conglomerates such as billionaire Jack Ma’s Ant Group and Ping An Insurance (Group) Co. have won approval to form such units.

A crackdown on the more loosely-regulated online lending market is forcing a rethink for giants such as Ant, which saw its initial public offering derailed last year. It now will move the bulk of consumer lending into the consumer finance unit, which can operate nationwide, Bloomberg News reported earlier this month.

The new rules join existing ones that have been enacted since 2006 to grade other types of financial firms, including banks, trust and securities firms. The most recent one was announced yesterday for insurance asset management firms.

About 30 consumer finance companies have been set up or approved, mostly controlled by banks.