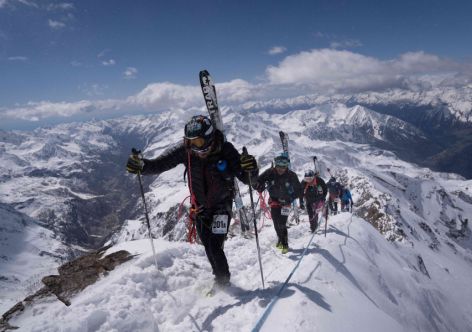 Following the Milano-Cortina 2026 Organizing Committee’s recommendation last week, for the first time in history, ski mountaineering will be proposed by the IOC Executive Board as an addition to the Olympic program. While acceptance for 2026 would not guarantee ski mountaineering’s return for any subsequent Games, the significance of this major step forward has not been lost on the IMSF.

"The possible inclusion in the Milano-Cortina Winter Games of 2026 will bring ski mountaineering to a much higher level in terms of visibility and development of the sport around the world," IMSF spokesperson Giulia Avagnina tells Around the Rings.

"We do not currently know whether our sport will be part of the succeeding edition of the Winter Games after Milano-Cortina 2026; the ISMF commits anyway to work hard in that direction as it has always done in the past for the Olympic path."

An IOC press release discussing the proposal noted that mountaineering was "a particularly popular sport in Italy, with deep historical and sporting roots across the alpine regions", as well as a "fast-growing winter sport among amateur and weekend practitioners". 2026 Olympic host Italy is a leading nation in ski mountaineering competitions, and while the sport is most developed in Europe, the IMSF now counts 38 member federations from four different continents.

The IMSF is also confident of mountaineering's inclusion meeting the IOC’s commitment to environmental sustainability, a key pillar of the Olympic governing body’s ‘Agenda 2020’ strategic roadmap.

"[Olympic inclusion] will be important for the Skimo Movement which has its values – among others – in a low environmental [impact], being completely in line with one of the global priorities which is of course sustainability," said Avagnina.

Ski mountaineering recently made its first ever IOC-sanctioned appearance at the 2020 Youth Winter Olympics in Lausanne, Switzerland, where individual and sprint events for both genders and a mixed relay were held. The current proposal for Milano-Cortina 2026 involves those exact five events, with 24 athlete quotas per gender.

The IOC Executive Board’s recommendation on mountaineering's 2026 inclusion will be discussed at the IOC Session in Tokyo on 20-21 July 2021. If approved, the full event program and quotas shall be determined at the IOC’s June 2022 Executive Board meeting.