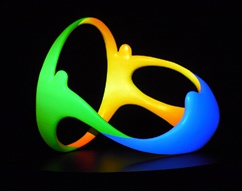 It is a logo unlike anything before, this intertwining of three figures that make a first-ever three-dimensional emblem for an Olympic Games. What with 3-D becoming a wave of the future for media, Rio may have found a symbol that easily plugs into 21st century tastes.

With space between the figures, the logo seems to float with life. Unlike logos of recent Games, the new emblem for Rio isn’t laden with symbolism, such as the ancient seal that was used for Beijing or the classical laurel wreath that framed the Athens logo. And both existed in a two-dimensional world.

This Rio logo can also be mined for its symbolism, whether the array of color, the unity portrayed by the figures holding hands, or a curve that takes the shape of Sugar Loaf. But it’s the 3-D nature of this logo that will make it memorable among the emblems of the Games.

IOC President Jacques Rogge said the flowing curves of the logo remind him of the sculpture of Henry Moore. The remark immediately drew cheers from the audience at a press conference after the New Year’s Eve unveiling.

In Brazil, at least, the new logo for Rio 2016, is now yesterday’s news with something much bigger taking place New Year’s Day: inauguration of Brazil’s new president, the first female to hold the post.

IOC President Jacques Rogge was among the VIPs at the inauguration Saturday in Brasilia, a group that also included U.S. Secretary of State Hillary Clinton and Venezuelan President Hugo Chavez.

In comments about the Olympics in her inaugural address, she identified government investment in airport infrastructure as one of the priorities for her new government ahead of the 2014 World Cup and 2016 Games.

Rousseff, who served as Lula’s chief of staff, is expected to continue the government’s support for the Olympics with no variation from her predecessor’s policies.

Move over, Beijing and Sydney: your Olympic fireworks mastery may be challenged by Rio de Janeiro. The 25 tons of gunpowder and chemicals set alight on New Year’s Eve at Copacabana was an intimidating show of strength from Rio. Copacabana’s 6km of wide sandy beach provides an ultimate theater for a show launched from a dozen barges anchored 250 meters from the shore.

Hard to say exactly but probably more than a million people lined the Copacabana shoreline for Reveillon, as the New Year’s party is known. Whether the Olympics will draw such crowds to revel in the Games is a question Rio organizers will have to ponder.

Reveillon ended Saturday morning with mounds of trash the only unseemly aftermath, despite the length of Copacabana heaving with shoulder to shoulder revelers only hours before. A substantial police and security presence was obviously key to crowd safety, something that obviously will be needed for 2016 should Copacabana become a major party scene. But will Rio be able to meet the public safety challenge of a massive street party when it already faces the mandatory task of securing the venues and events of the Olympics?

A new addition to the 2016 Olympics, golf (rugby the second) made an Olympic debut amid the hub-bub of the logo unveiling New Year’s Eve.

One of the videos created to explain what the new emblem was all about used a montage of Olympic sports, including golf. It’s the first time we’ve seen an officially produced video for the Olympics that includes golf, which was added to the Games in Rio 14 months ago.

Among the scenes of Olympics denizens such as track and field, equestrian, tennis and such, it’s one of those "aha" moments when you see a golf ball being set atop a tee.

The design process for the new logo far more quickly than past OCOGs, primarily to get the boost of launching on a New Year’s Eve. The mascot, the next creative emblem that Rio 2016 will roll out, may enjoy a longer genesis, unveiling expected after the London Olympics.