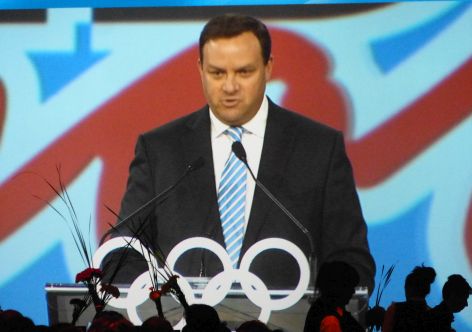 Lazarus said that while NBC has traditionally focused on the Olympic Games, U.S. trials and some world championships, the network is "now more aligned with the IOC and President Bach in creating more year-round visibility for all sports in the Olympic program, all in service to Agenda 2020 and its many progressive ideas."

Lazarus began his remarks in French to the delight of the crowd of about 2,000. Audience members roared with appreciation when he explained that he doesn’t speech French, but was making an effort on their behalf.

Reverting to English, Lazarus again received thunderous applause when he said it is "our great hope at NBC and in the United States that the best athletes in the world, from the NHL, will participate in the Olympics and that the NHL and its players choose to stay a part of the Olympic family for a very long time."

Lazarus said two out of three Americans – 219 million -- watched the 2012 London Olympic Games. Non-traditional fans joined sports fans to make it the most watched event in TV history in the United States.

"These are not just sports fans. These are Olympic fans. The Olympics promote co-viewing, family values, multi-generational super fans, and it’s our job to bring the Games to them."

Lazarus added that the London Games reached more millennial viewers than the top five youth networks in an entire year in the United States.

The scale of the Games as a media property continues to grow. When Montreal hosted the Games in 1976, only 76.5 hours of video – about three days worth -- were broadcast back to the United States.

Fast forward to 2012 and that number ballooned to 5,535 hours of broadcast, cable and streamed video, or 230 days of continuous coverage.

"What we have learned from our audiences is that the more we produce, the more they want to consume," Lazarus said, noting that use may be via cell phone, tablet, personal computer or television.

"Both London and Sochi were the most consumed games ever for summer and winter, and we’re not stopping now," he said. "Our audiences can count on us to continue to innovate and demand that we build this important content across every platform with new technologies over the next several decades.

"How can they be sure that we’re going to do this? Frankly, we believe we can, and we will because we are part of Comcast, our country’s biggest media and technology company."

Lazarus said the company has spent billions of dollars on research and development to enhance consumer experiences. The Olympics benefit through new production techniques, more video on demand, new digital offerings, new camera angles and "ways to bring the Games to life" in partnership with Olympic Broadcasting Services (OBS).

While Lazarus said no one knows what the future holds, "We do know that the Olympics will continue to bring families and friends together to view them. Regardless of the screen or device, we will deliver the Games in every form known today or invented in the future. That is our pledge."

Lazarus said his first Olympic job was as a waiter in a Lake Placid hotel in 1980. As a high school student in upstate New York, he had been determined to attend the nearby Olympic Games and convinced his parents.

"While I didn’t get to see very many events, I loved the energy and I recall how exciting it was," Lazarus said. "Back then, I never dared to dream that I would have the level of involvement that I am fortunate to have now."

He added that the Games are "part of the fabric and the DNA" of NBC Universal, which uses Olympics to promote other parts of the company, including television shows like the Today Show and theme parks. NBC broadcast its first Olympic Games in 1964.

"We expect the games in Rio to be the biggest ever," Lazarus said. "We believe in the value of the Olympics, we believe in the mission of the IOC and the NOCs and what this means for NBC Sports is that we have a great responsibility to the athletes, the federations and the IOC to promote, program and create passion for the Games for each and every one of them… and we will do this to the best of our ability."

The event at the Palais des Congrès raised more than $1.6 million dollars for the Canadian Olympic Foundation in support of the country’s top athletes.