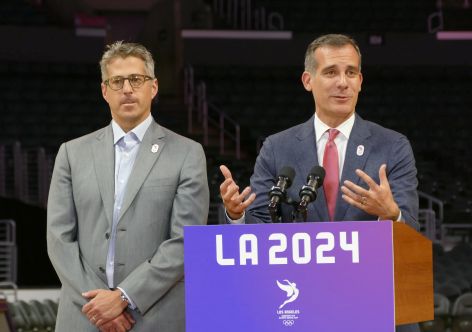 (ATR) The Los Angeles Olympic bid tells Around the Rings a statement by leader Casey Wasserman is leading to false speculation they are bowing to their rivals in Paris.

LA 2024 released a statement from Wasserman on June 7 detailing why Los Angeles would benefit the Olympic Games in 2024 and beyond. While the statement does include much talk about the future of the Olympic Movement, LA 2024 says it has not given up hope on hosting the Games in 2024.

"We just wanted to reiterate that Los Angeles would be the ideal host city and the ideal partner for the IOC," an LA 2024 spokesperson tells ATR.

LA is competing with Paris to host the 2024 Summer Games after three cities dropped out during the course of the two-year bidding race. The two cities have shown off their seemingly air-tight bids to the International Olympic Committee which is keen not to lose either one as a future potential host.

While Paris 2024 has insisted their Olympic and Paralympic project is only available for 2024 given a land usage deal for the Olympic Village only valid for the 2024 Games, Wasserman says LA 2024 has never seen its bid as solely for the 2024 Games.

"We don’t believe in ultimatums – we believe in partnership; that’s why we are willing to look beyond ourselves and ask the question 'how can LA best serve the long-term needs of the Olympic and Paralympic Games?' "

The above statement likely fueled most of the incorrect speculation the bid is giving up on its 2024 hopes, particularly when Wasserman writes ‘we are willing to look beyond ourselves’. However, LA 2024 tells ATR this is the same type of language the bid has used since the ANOC General Assembly last November.

The statement also seems to include a direct slight at its rivals Paris 2024 who have insisted repeatedly they are solely focused on hosting the 2024 Olympics.

"We could have used [the ultimatum] strategy, but we didn't because we thought it was presumptuous to tell the IOC what to do and how to think," Wasserman said.

"We’re better partners than that. It has always been our contention that LA 2024 had to make as much sense for the Olympic Movement as it did for the people of LA."

The full statement can be read here.

The IOC Executive Board will hear from the working group determining the feasibility of a dual 2024 and 2028 Olympics award to the two remaining cities at its EB meeting June 9 in Lausanne. It is widely expected that the IOC executives will put in motion the series of events necessary to make the dual award a possibility by the Sep. 13 IOC Session in Lima, Peru.