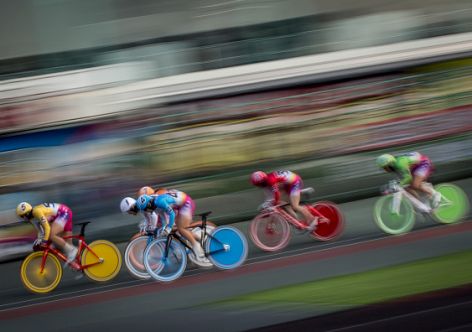 KAWASAKI, JAPAN - JULY 11: Riders compete during one of the Girls Keirin races at Kawasaki Velodrome on July 11, 2015 in Kawasaki, Japan. Keirin is a form of cycle racing developed in Japan around 1948 for gambling purposes and has since become extremely popular. It is one of only four sports that patrons are allowed to bet on. In 1957 the Japanese Keirin Association was founded establishing a uniform system for the sport. Today riders must complete study at the Japan Keirin School. For riders accepted to the school, they take on an extremely strict, 15hr, six day a week training schedule, before being eligible to graduate as approved professional Keirin riders able to compete in Japan's professional Keirin league. There are over 3000 registered riders in Japan and salaries for top riders can bring in as much as 2million USD, average riders can bring in salaries of 100,000USD. Despite its popularity, Keirin racing has seen a steady decline since the 1990's with attendance and revenue declining consistently. With Japan's ageing population and Keirin seen mainly as a gambling activity, it's fan base is made up primarily of punters over the age of 50. Attracting young fans is a crucial step to reinvigorating the sport. However the lack of interest from young Japanese in sports betting and the popularity of baseball and football, attracting younger spectators is an up hill battle. The JKA has taken steps to attract younger fans, In 2012 women's racing was reintroduced under the name, Girl's Keirin and promoted with a national TV advertising campaign showing riders in high heels and dresses as an attempt to attract younger viewers. With the current debate in Japan over the introduction of casinos and the popularity of Pachinko slot gambling with the younger generation, Keirin racing could see yet another decline. (Photo by Chris McGrath/Getty Images)

(ATR) Around the Rings understands the decision has been delayed amid ongoing concerns about relocating 2020 Olympic cycling venues out of Tokyo.

Games organizers and the UCI had hoped to lock down plans for the velodrome, BMX and mountain bike course this week.

But ATR has learned that the venues will not be approved by the UCI Management Committee, which is meeting Wednesday and Thursday.

The delay suggests that the UCI remains unwilling to accept or compromise on Tokyo 2020’s proposal to move the velodrome and BMX out of the Japanese capital.

The UCI has raised serious concerns with Games chiefs about the impact of the relocation plan over more than six months of talks.

Tokyo 2020 leaders claim they will save money by moving the venues to Izu – two-and-a-half hours away from the Japanese capital.

The federation has countered proposals they say will affect cycling’s post-Games legacy. President Brian Cookson and UCI officials claim the three alternative venue proposals from the bid book plan, to keep the venues in the Tokyo metropolitan area, are the most cost-effective options.

The UCI has said it won’t be rushed into decisions.

ATR is told that the UCI Management Committee could make a decision on the Tokyo 2020 venues in the coming weeks or months via an e-voting system, rather than waiting until its next scheduled meeting to sign off on plans.

"In the spirit of Olympic Agenda 2020, the UCI, the Tokyo 2020 Organizing Committee and the International Olympic Committee are in ongoing discussions with a view to finalizing the cycling venues for all four disciplines as soon as possible," a UCI spokesman tells ATR.

"We all share the will to ensure that the cycling events in Tokyo in five years’ time take place in the best possible environment and conditions for the athletes, fans and broadcasters alike," he added.