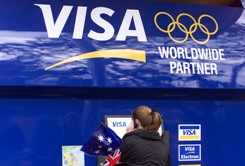 (ATR) Visa’s head of global marketing tells Around the Rings his company’s Olympic sponsorship isn’t about being "the only card accepted" at the Games for 25 years and counting.

"The Olympic and Paralympic Games begin and end with the athletes," Kevin Burke tells ATR, and so too does the partnership.

Monday is the 25th anniversary of the credit giant joining The Olympic Partner program as its exclusive payment card and official payment system.

However, the milestone won’t be marked by Visa telling everyone how many new cards have been issued since the 1988 Winter Games – a lot – or how many more will be added before the current contract cycle comes to an end with the 2020 Summer Games– think big.

"We’re excited to add these four remarkable individuals to our growing roster of Visa-sponsored athletes," Burke told ATR ahead of Monday’s announcement.

"Building off our legacy of athlete support since 1986, we remain committed to helping Olympic and Paralympic hopefuls achieve their lifelong goals as they embark on the greatest athletic challenges of their lives."

The foursome joins U.S. compatriots Michael Phelps, Allyson Felix, Kerri Walsh, Nastia Liukin, Katie Hoff and Bryan Clay among the more than 50 worldwide athletes and 20-plus national teams Visa will support throughout their journeys to the London Olympics.

The life stories of Long, Lomong, Nichols and Sacramone will also be featured in the company’s multi-platform "Go World" marketing campaign as a means to connect with cardholders during the buildup to the 2012 Games.

"They claim to use their card more when they’re aware of our Olympic advertising campaign," Burke said, adding that cardholders aren’t the only ones benefitting from Visa’s long-running sponsorship.

So-called "pass-through" rights permit financial institutions and merchants far too small for the TOP program to still associate with the Games.

"What that allows us to do is work with everyone from a Chase bank here to a SunTrust in Florida to a small bank down in Brazil," Burke explained.

"Because Visa is an Olympic sponsor, we give them the opportunity to then run a promotion for their cardholders to win a trip to the Games."

South Korea’s bid city was awarded the Winter Games on Wednesday at the IOC Session in Durban, a vote in which Burke says Visa had no stake.

"We look at each Olympic opportunity as a global partnership to drive our business globally," he told ATR, adding that sponsorship activation is never about the event itself.

Prior to Monday’s milestone, Visa’s partnership with the Olympics last made headlines when a glitch in the payment system for London 2012 frustrated some cardholders hoping to buy tickets on the opening day of sales in March.

Visa cards that expire before the end of August were being rejected, a hiccup Burke says was quickly corrected and had "no real impact" on the process.

"We’re a trusted and reliable network," he added, "and we’re proud of that."

Visa’s other 25th anniversary announcements center around generating visitor spending during the Olympics as well as the FIFA World Cup, its other top-tier sports sponsorship.

Vancouver, for example, enjoyed a 93 percent year-on-year increase in international cardholder spending during the 2010 Winter Games, according to a report due for release Monday.

Beijing, by comparison, delivered a 15 percent uptick back in 2008, and Visa reaped an 82 percent surge during last year’s South African World Cup.

"What is particularly encouraging is the strong indication that in the mega-sporting events analyzed for this report, tourism-related spending increased substantially during the events and far beyond any increases that can be attributed to economic recovery only," Burke explains.

"This report looks to use electronic data generated from international Visa transactions as a way to assess visitor spending patterns in the hope that it can provide material that can help destinations in their own planning, bidding and hosting activities."

In a separate report, Visa predicts a $1.2 billion consumer spending boost throughout the London Olympic and Paralympic Games, the largest ever increase for a host city.

"At the end of the day, our Olympic sponsorship works," Burke said.

"Through careful monitoring and analysis, we know that it drives transactions and revenue growth, builds brand awareness and affinity, optimizes our marketing efforts and helps build and deepen relationships with clients."

It’s no surprise then he says he expects the relationship to continue "indefinitely" between Visa and the IOC.