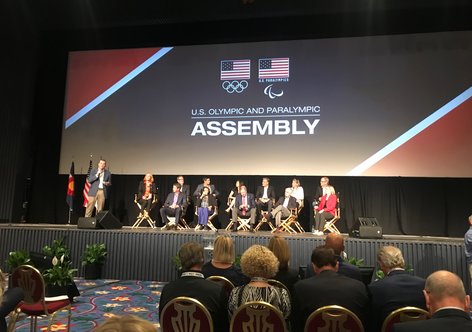 (ATR) Outgoing and new leadership at the United States Olympic Committee told its annual assembly they "don’t have all the answers," but are working to regain athletes' trust.

It was also the first time newly appointed USOC Chief Executive Sarah Hirshland could address the broader U.S. Olympic movement in her role. Hirshland began in her position in August, and said she is "humbled by the responsibility," in an emotional speech to the assembly.

"I know that I don’t have all the answers," Hirshland said. "I don’t even know all the questions to ask. Just know that I’m all ears and I’m all in."

Two areas that the USOC needed to improve on was strengthening the U.S. Center for Safe Sport, and bolstering athlete engagement and safety, Hirshland said. She expressed goals of making the USOC more financially transparent and better at explaining its decision making process.

Hirshland called for unity within the movement, and a respectful exchange of ideas in an effort to move the USOC forward beyond the scandal. She said that last year the assembly was discussing the runup to the PyeongChang Olympics, and the USOC hasn’t lost sight of Tokyo and beyond.

"Today is a different day," Hirshland added. "A time to reflect and respect the brave survivors who have taught us all so much. A time for change and for action. A time for a newly constructed unity."

Probst in his address said that leadership at the USOC "have too-often failed to keep [athletes] safe," as the U.S. Olympic movement continues to grapple with fallout from the Larry Nassar abuse scandal.

"Healing begins with recognition and acceptance, and we fully recognize and accept that the failings that have taken place are ours to own," Probst said. "For all the triumphs and successes that we’ve achieved during the last decade, it is our collective failure to keep you safe that that will forever cause me deep and profound regret."

Probst also took some time out to criticize the morning’s decision by the World Anti-Doping Agency to reinstate the Russian Anti-Doping Agency. Probst said the WADA decision "flies in the face," of the body’s responsibility to the world’s clean athletes.

"On that point, WADA and the IOC need to guarantee athletes that when they compete, it will be on a level playing field, without any compromises," Probst said. "Suggesting that Russia has lived-up to its obligations is disingenuous and today’s decision to reinstate RUSADA flies in the face of WADA’s responsibility to clean athletes everywhere."

After the opening speeches the USOC Board of Directors opened the floor up to questions from the assembly in a town hall.

The questions were mostly positive and reflected the conciliatory mood reflected in the day’s speeches. Both the status with the Ropes & Grey investigation and the new search for a USA Gymnastics President and chief executive.

USOC Board member Whitney Ping said that it is likely that Ropes & Grey try to finish its investigation by the end of the year. Originally the report was expected to be due by "late summer".

Soon to be USOC chair of the board Susanne Lyons said that the investigation has not been able to interview many survivors of Nassar’s abuse. Lyons appealed to survivors to come forward to speak with Ropes & Grey so the report would be 100 percent complete, because if it were not it would be "disappointing".

Board member Robbie Bach updated the assembly on the ongoing leadership search for USA Gymnastics, after President Kerry Perry resigned earlier this month. An outside firm has been contracted to help with the search, and ultimately "progress is being made" amid the setbacks. Bach gave a vote of confidence to the new board of directors, which was installed earlier this year.

"I can't promise we'll have a perfect CEO, but we have a board capable of hiring a perfect CEO," Bach said. "I can't say that was the case in the past."