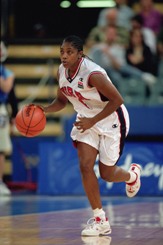 (ATR) Four-time basketball gold medalist Teresa Edwards tells Around the Rings that the U.S. Olympic Committee has "got the right one" as Chef de Mission for the 2012 London Games.

Although one of the most decorated Olympians in U.S. history, Edwards was not the first choice for chef de mission. On April 29, gymnast Peter Vidmar was named to the post, but he resigned on May 6 amid controversy over his opposition to gay marriage. Vidmar said he did not want the issue to be a distraction to athletes.

Edwards, 46, says she went through a thorough vetting process. "Of course, they had to do their homework," she says. "I've been interviewed by quite a few people, as far as just making sure they covered every base. I'm well aware what I'm walking into."

And Edwards could hardly contain her excitement on Tuesday after the USOC board of directors approved her selection during a meeting in Stanford, Calif.

"This is huge," Edwards tells ATR in an exclusive interview from Tulsa, Okla., where she is an assistant coach for the Tulsa Shock of the WNBA. "I try not to put this in front of my medals, but it feels like they've taken all five medals that I've won and presented them to me at once."

Edwards, a native of Cairo, Ga., who has a residence in Atlanta, delivered the Athlete's Oath at the 1996 Olympics.

After marching in five Opening Ceremonies, this time Edwards will lead the U.S. procession in London.

"I waited a long time to do that, didn't I?" she says. "This is something I never dreamed I'd do. This is the world stage again, and the opportunity to go back into it with a new generation of athletes."

At age 20, Edwards was the youngest gold medalist in women's basketball in 1984, then became the oldest woman to stand on top of the podium in 2000 at age 36.

"As a five-time Olympian, Teresa understands the needs of our athletes at the highest level of competition," USOC Chairman Larry Probst said in a statement. "She's an American hero, and I'm grateful she has agreed to serve in this important role."

Edwards played professional basketball in the U.S., Europe and Japan. She was an analyst for NBC Sports during the 2008 Olympics in Beijing.

"I can't wait to be involved heavily," she says, "just to meet the athletes and the other chef de missions around the world."

Edwards says she's excited to share the wisdom that she has. She plans on "being available, being open and understanding the backgrounds of the athletes. For some people, it will be their first time at the Olympics, for other people it's old hat. All their motivations are totally different.

"Having the capacity to encompass all of that, and to be on hand with these teams, that's where true wisdom comes from."

Teri McKeever, who in 2012 became the first female to become head coach of a U.S. Olympic swimming team, was accused by 19 of her swimmers during an investigation by The Orange County Register