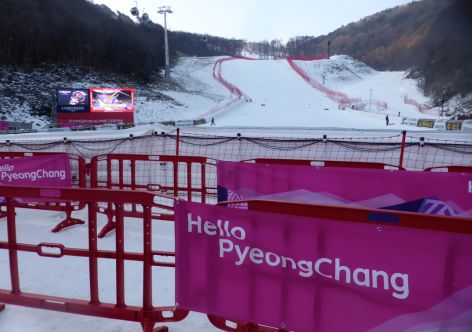 (ATR) Ticket sales for the PyeongChang 2018 Winter Olympics begin Thursday, Feb. 9 to commemorate the one year to go milestone.

The ticket launch will coincide with celebrations across South Korea, highlighted by the main event at the Gangneung Hockey Centre hosted by the PyeongChang 2018 Organizing Committee (POCOG). The event will feature live performances that will demonstrate traditional and contemporary Korean culture.

The event will also be preceded by the reveal of the official Olympic Torch and torch bearer uniform and a press conference where POCOG will update the press and stakeholders about final preparations.

The events will be attended by POCOG, members of the International Olympic Committee, PyeongChang 2018 ambassadors such as Yuna Kim and other sports stars.

The 44th edition of the 12-day competition will feature the best skiers in the world squaring off in super-G, downhill, giant slalom, slalom, super combined and the team event.

Six-hundred athletes from 70 countries are expected to compete for the title of world champion and the medals that accompany the top-three finishers in each discipline.

The championships will begin with an opening ceremony on Feb. 6 that will be highlighted by musical and cultural performances.

The event marks the fifth time the Alpine World Championships are taking place in St. Moritz, following successful editions in 1934, 1948, 1974 and 2003. The world championships conclude on Feb. 19.

The 2017 IBU World Championships are being held in Hochfilzen, Austria beginning on Thursday, Feb. 9. The 11 days of biathlon competitions features five disciplines for men and women along with one mixed relay event. The five disciplines are sprint, pursuit, individual, mass start and relays.

The competition will be preceded by an opening ceremony on Wednesday that will feature modern musical acts from Austria and other performances.

A total of 326 athletes from 37 countries will be competing in the 49th edition of the world championships, according to the IBU. The federation says that the event will draw a lot of media coverage with approximately 280 journalists expected at the championships.

The leaders of the International Association of Athletics Federations will gather for the first time this year in France on Monday, Feb. 6.

The 208th meeting of the IAAF Council will be held at the Riviera Marriott Hotel La Porte de Monaco in Cap d’Ail.

The IAAF Council is expected to discuss the ongoing corruption scandal centered around former IAAF president Lamine Diack and recent decision by the IAAF Ethics Board that banned former communications chief Nick Davies for life from the federation.

The IJF Paris Grand Slam will feature the best judokas in the world including Olympic medalists from Rio 2016 and finalists from the last IJF World Tour event of 2016 in Tokyo, Japan.

In total, 440 athletes from across 60 countries and four continents will compete for the first grand slam title of 2017.

The two-day tournament can be live streamed for free at www.ippon.tv.

The six-day youth sporting festival features nine sports and 832 athletes from 40 of the 48 countries within the European Olympic Committees.

The EYOF concludes with a closing ceremony at the athletes village on Feb. 17.