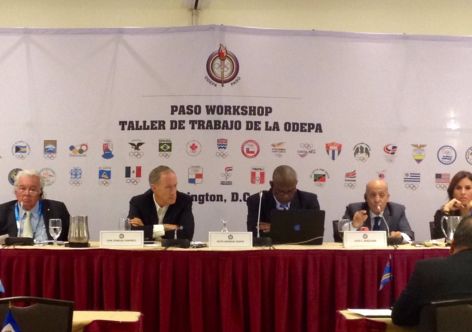 (ATR) Leaders of the Pan American Sports Organization (PASO) are meeting in Miami, Florida today to review the potential of the organization to host more events.

The meeting is the first of the PASO New Events Commission that was established at PASO’s workshop at the heels of the ANOC General Assembly in Washington, D.C. last October.

Sisniega tells Around the Rings the commission is considering the addition of a number of new events to its calendar.

Sisniega tells ATR the New Events Commission will not discuss the revisions at the meeting in Miami.

"Those will be discussed at the EB meeting but more importantly at the Extraordinary General Assembly in Brasilia where the NOCs will determine what PASO’s new statutes will be," he says.

Proposed revisions to the constitution include the introduction of term limits for executives, the number of votes per country and the introduction of recent experience requirements to be an executive of PASO. After the revisions are passed the organization can move forward with electing a new president with a vote likely to come after the Rio 2016 Olympics and Paralympics conclude.