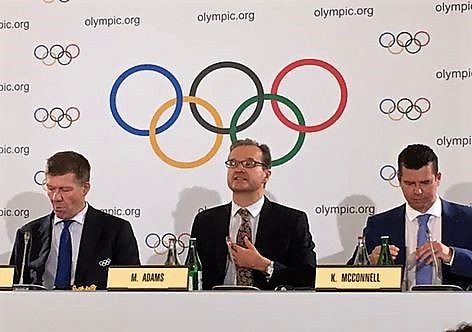 (ATR) The IOC Executive Board has adopted a business case for the Independent Testing Authority, with a preliminary body to be in place for the PyeongChang Olympics.

IOC medical director Richard Budgett told a press conference in Lausanne that the ITA would be "more efficient and more effective" in the fight against doping.

The statutes for a not-for-profit Swiss foundation are soon to be ratified to ensure the ITA can be properly constituted. Budgett hinted that the new body would not be fully operational for PyeongChang 2018. Instead, a preliminary body funded by the IOC to service international federations would operate.

At PyeongChang 2018, the Court of Arbitration for Sport will again be the sanctioning body – as it was at Rio 2016.

Budgett said that once the ITA’s statutes are approved a board of five individuals would be appointed. At least two of them will be independent, including the chair.

He said the ITA’s role was to "step in and actually make the decisions about who is going to be tested, when and what for". It will review case management so the IOC is not involved in any which potentially could present a "conflict of interest".

He said the IOC was "hopeful" that having a single authority would aid harmonization of compliance across federations, raising standards in the long term.

On retesting of doping samples from recent Olympics, he confirmed there were no London 2012 developments. But further results of reanalyses from the Sochi Olympics are due and retesting of Vancouver 2010 samples should be finished in August; over 1000 new tests is the target.

The IOC’s rulingbody met with Rio 2016 president Carlos Nuzman and comms director Mario Andrada to discuss the dissolution of the organizing committee.

It will take a while yet to close the books on Rio. The IOC has asked for more detailed information about the organizing committee’s financial accounts.

The IOC confirmed it contributed $1.53 billion to staging the Games. "This is in addition to an exceptional effort to significant cost savings and additional financial undertakings by all the Olympic stakeholders which amounted to hundreds of millions of dollars to make these historic Olympic Games possible," said an IOC statement.

Former IOC president Jacques Rogge stepped down from his position as special envoy of the UN secretary general for youth, refugees and sport on June 30, deciding against staying on in the role.

But the IOC said it is stepping up its commitment to help refugees around the globe. It is discussing a potential Refugee Olympic Team for Tokyo 2020 and reinforcing its efforts with the UN. The NOC of Qatar has today announced it will support the IOC refugee programs as will the NOC and government of Liechtenstein. Discussions with other NOCs are underway.

After recent attempts to move towards gender equality for the Tokyo Olympics, the IOC has made changes to ensure gender balance for the Lausanne 2020 Winter Youth Olympics.

It reflects what has been achieved for the Buenos Aires 2018 YOG.

Ski mountaineering was on Sunday approved as the eighth sport for Lausanne 2020, based on the proposal from the organizing committee. The sport will be represented in the 17-18 year-old age group in individual, sprint and relay disciplines, and will join the existing seven Olympic sports on the program.

Also introduced is mixed-NOC 3x3 ice hockey, a women’s doubles event in luge and a women’s Nordic combined ski event. Only existing venues will be used for all the new sports and events.