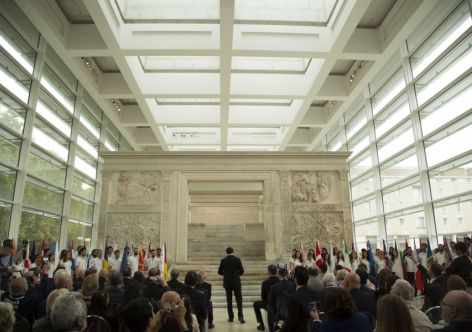 Filmmaster continues its collaboration with the Olympic and Paralympic world: once again the European Olympic Committees organization has chosen Filmmaster Events for the ceremonies preceding the Baku 2019 European Youth Olympic Festival and the Minsk 2019 European Games

Milan, 6 May 2019 – In less than a month, the Flame of Peace has twice returned to shine on Rome with two torch-lighting ceremonies at the Ara Pacis altar, the oldest ancient temple dedicated to Peace.

On behalf of the European Olympic Committees (COE), Filmmaster Events organized both ceremonies, held on 12 April and 3 May in the Museum of the Ara Pacis, which respectively involved the presentation of the 2019 European Youth Olympic Festival (EYOF) in Baku (scheduled from 21 to 27 July) and the celebration of the second edition of the European Games, held in Minsk in 2019 (21-30 June).

These two extraordinary multi-sport summer events, created for European athletes and promoted by the European Olympic Committees and the respective Organizing Committees of Baku 2019 and Minsk 2019, are designed to spread the spirit of peace and brotherhood among different communities, in line with the distinctive sporting values of the Olympic tradition.

During the ceremonies, the symbol of the Committee, the Golden Olive Tree of the Goddess Pax, exclusively made by Apulian goldsmith Michele Amato, was symbolically handed over to the two institutional representatives of the host countries by EOC President Janez Kocijancic. The work, which represents an ancient olive tree, was given to the two Organizing Committees so that it can be taken to Baku and Minsk following the Torches, which were also presented during the two ceremonies. The Torch presentation was accompanied by the Cantering Choir conducted by Ludovico Versino.

In addition to EOC President Janez Kocijancic, the two ceremonies were also attended by some of the most important authorities in the Olympic and institutional world such as: the Honourable Giancarlo Giorgetti – Undersecretary of State to the Presidency of the Council of Ministers, Giovanni Malago’ – President of the Italian National Olympic Committee, Raffaele Pagnozzi – Secretary General of the EOC, Azad Rahimov – Minister of Youth and Sports of the Republic of Azerbaijan, Siarhei Kavalchuk – Minister of Sport and Tourism of the Republic of Belarus.

Filmmaster Events is one of the most renowned companies in the world in the creation and production of events, live shows and ceremonies. The company has been in business for over 40 years and has offices in Europe, the Middle East and South America. Its professionals are able to design unforgettable live events and to transform them into reality, combining creativity and innovation with unparalleled project management to serve the goals of the most diverse customers. Thanks to its wealth of experience, the company is one of the few operators in the world accredited to create and produce Olympic ceremonies: its latest productions include the Rio 2016 ceremonies and the torch relay, in partnership with Brazilian company SRCOM in the CC2016 consortium. Filmmaster Events, part of the Italian Entertainment Network, is also the most awarded company in the history of the Best Event Awards.

25 Years at #1: Your best source of news about the Olympics is www.aroundtherings.com, for subscribers only