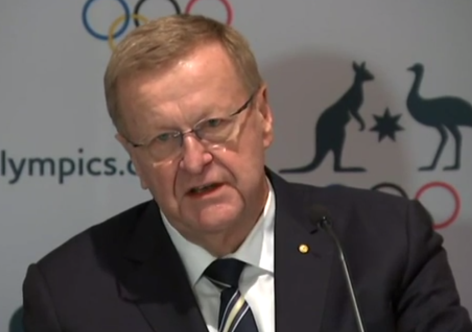 (ATR) Australian Olympic Committee President John Coates brushed back any talk of resignation following the release of a report into the "toxic" culture of the committee.

An independent report was commissioned after accusations of bullying were made by former executive Fiona de Jong against media director Mike Tancred. The results of the report did not specifically name a bullying culture in the AOC, but noted a "dysfunctional" organization according to local media.

Tancred was forced to step down pending the results of the report and was reprimanded. Another report from an independent commission into other allegations levied at Tancred is due in the coming days

Coates said that the second investigation includes a total of three "current and past staff" that have come forward and one more allegation. Any punishment against Tancred would come "cumulatively" with a report due by the end of the month.

"We were hoping for it to be before now," Coates said. "But obviously in these matters it's very important that both the complainants and Mike Tancred be given natural justice."

The 64-page report came after Coates staved off a contentious challenge for the AOC presidency amid a public feud with the head of the Australian Sports Commission.

After the release of the report AOC President Coates held a press conference announcing new Tokyo 2020 chef de mission Ian Chesterman. Coates took questions about the report, saying he would not relinquish control of the AOC.

"Why should I resign?" Coates said in response to questions.

"I'm president and there's been a succession of CEOs under me. I have not swept anything under the carpet."

-- The Sydney Morning Herald reported that Coates "says he's not to blame for the open hostility in the organization". The Herald also reported that the 64-page independent report showed "a dysfunctional culture marked by favoritism, unfairness and fear," within the AOC.

-- The Daily Telegraph says that Coates "has refused to take any responsibility" for his the organizational culture found under his leadership.

"Despite being at the head of the organization, Coates repeatedly told reporters in Sydney on Thursday he was not to blame for the toxic culture detailed in the 64-page report released following an independent review into the AOC workplace," the Telegraph wrote.

-- Reuters wrote that Coates shifted the responsibility of the toxic environment to "many who were no longer at the AOC" and remained steadfast in his leadership.

"New chief executive Matt Carroll said the AOC would implement all 17 recommendations of the review, which presented the body with a ‘platform to reset the organization.’" Reuters added.