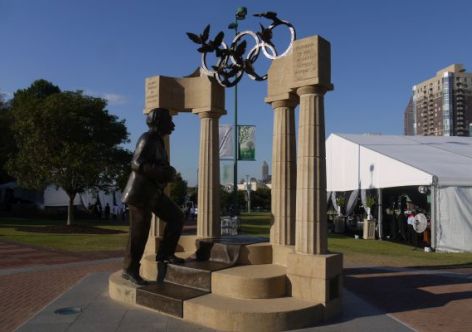 (ATR) The Centennial Olympic Park in downtown Atlanta will undergo major changes over the next two years as it solidifies its position at the heart of the city.

At the time of its creation ahead of the 1996 Olympic Games in Atlanta, the park was filled with trees and shrubs as a distraction to its unsightly surroundings of abandoned housing projects.

Twenty years later, the park is a bustling hub for commerce, surrounded by the likes of the Georgia Aquarium, the World of Coca-Cola, Phillips Arena, the Georgia Dome and the rest of the Georgia World Congress Center (GWCC) campus.

The park will celebrate its 20th anniversary on July 16 as volunteers and organizers of the ’96 Games join with Olympians, Paralympians and residents to "Relive the Dream" of staging the world’s largest sporting event in Atlanta. Once the fireworks are over, organizers of the event at the GWCC will begin looking forward to its ‘Five Cornerstone Projects’.

Communications specialist at the GWCC Morgan Smith-Williams tells Around the Rings each of the five projects seeks to "open up the park to its surrounding areas".

"We would love for people that are staying on Peachtree Street or the Hotel District to have a clear vista to showcase our city in the best light possible," Smith-Williams says. "It also opens a lot more green space in a place where there isn’t a lot."

The first of the five projects is the expansion of the park into the land currently occupied by the Metro Atlanta Chamber of Commerce. The commerce building was acquired by the GWCC in January and is scheduled for decommission this fall. The expansion will open up a clear view from the park to its surroundings and vice-versa.

The next renovation will turn the portion of Andrew Young International Boulevard that cuts through the park into a pedestrian plaza, an idea Smith-Williams tells ATR was part of the original design for the park.

"With the infrastructure needs of the 1996 Olympics and having to have a gateway to get from east to west during the Games it was just more prudent to make it a street at that time," she says. "We’re going to return it to the original architect’s vision and the adopt-a-brick campaign that we’ve relaunched, that’s where those bricks will be laid."

The Baker Street entrance to the park will also undergo a makeover in order to create more vistas of the surrounding areas of Centennial Olympic Park, creating a hardscape as opposed to the trees and bushes that currently reside there.

The final two projects at the park will make the space an even better place to host events. Smith-Williams tells ATR the Southern Company Amphitheater behind the Fountain of Rings will be renovated soon and that the Park Avenue West operations building is likely to be reimagined into an event space.

"We’re grateful for Southern Company for donating [the amphitheater] 20 years ago," she says. "We’d like to create a permanent bandshell, update some of the speaker systems and technology and also just expand it to make a larger space to accommodate more people for some of our weekly concert series and larger events."

"We’re not trying to compete with Verizon Wireless [Amphitheater], we’re just trying to create a more homey space downtown and give an update to something that hasn’t had an update in 20 years."

GWCC has renderings to redesign the Park Avenue West building into an event space that could support the GWCC’s many convention clients looking for a large venue.

The upcoming renovations will likely extend Centennial Olympic Park’s legacy for another 20-plus years and continue to be a social hub for the people of Atlanta.