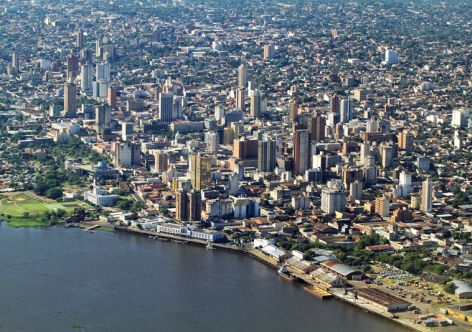 But the president of the South American Sports Organization (ODESUR) tells Around the Rings that the physical rehabilitation of long weeks will not prevent him from working "every minute" on preparations for the South American Games Asunción 2022.

Asunción 2022, after its date change, is less than 21 months away from its opening.

In the midst of the attack of a second wave of the COVID-19 pandemic on South America, including Paraguay, the organizers of the regional mega-event managed to advance with the award of tenders for the five main sports infrastructure projects: the velodrome, the hockey stadium, the skating rink, a gymnastics complex and a field complex.

Since the beginning of the pandemic, Paraguay has registered more than 128,000 cases of infections (about 104,000 recovered) and more than 2,600 deaths.

"Although we know that the Games will be very useful for the country, for its economic reactivation and sports legacy, one is always in doubt about the health emergency," says Pérez López-Moreira, also president of the Paraguayan Olympic Committee

"We are working with a very austere budget," adds the Olympic leader.

The estimated cost has been projected between $70 and $75 million.

Organizers insisted from the outset that Asunción 2022 already had 80 percent of the necessary sports facilities.

"The five works that we have just awarded complete what we already have," assures the executive who is a member of the IOC, of ​​the executive boards of ANOC and Panam Sports and president of the South American Tennis Confederation.

Faced with the health crisis, ODESUR postponed the Games until October 1 to 15. Originally the event had been scheduled from April 26 to May 9, 2022.

Given the number of cancellations and postponements due to COVID-19, ODESUR was also forced to move the First South American Master Games in Santiago de Chile for a second time. Already rescheduled for March 10 to 21, 2021, the event will now be held either in the last quarter of 2021 or early 2022, with an exact date to be determined.

The Asunción 22 Games were also suddenly canceled by the government in the summer of 2019, a decision subsequently rectified.

"Today we are working very closely with the Ministry of Sports," says Pérez.

"We will have austere Games with an important organizational and sports legacy," he remarks.

"The philosophy is to do a lot with little."

It is estimated that more than 4,500 athletes from the 15 ODESUR member countries will come to Paraguay. The last edition was held in the Bolivian city of Cochabamba with an attendance record of more than 4,000 competitors.

Pérez notified ATR that the ODESUR General Assembly scheduled to be held in person in the Paraguayan capital on February 19 and 20 will not be held.

"We suspend it because we have some countries with closed borders or with very strict quarantines.

"We are evaluating the new date and in the first days of February we will determine it.

"We will decide if it remains in person or it would be virtual.

"The main topic on the agenda will be to formalize the sports program of Asunción 2022," revealed Pérez in his exclusive statements.

A month ago Camilo Pérez fulfilled his first mission in the Americas as a representative of IOC President Thomas Bach since becoming an IOC member in 2018.