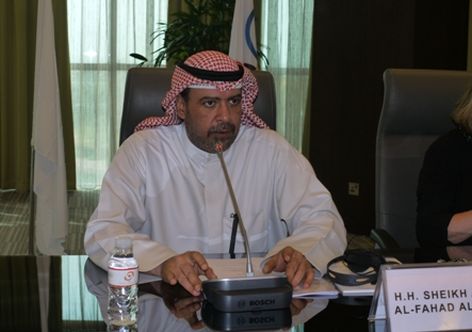 Now into its third decade, the Association of National Olympic Committees must make up for lost time, according to its president.

Sheikh Ahmad al-Fahad al-Sabah said during his press conference after the ANOC Executive Council meeting on Monday in Kuwait City that ANOC would has more reforms in store.

"We lost 30 years of our movement," Sheikh Ahmad said. He added that ANOC has to work with "speed" to achieve its goals.

"This is the demand of our NOCs."

While the comments could be interpreted as a slight against Mario Vazquez-Rana, who ruled ANOC for 33 years before being deposed by the Sheikh in 2012, Around the Rings understands it was more a reflection on the role ANOC plays in the Olympic Movement. Previously, ANOC primarily served a behind-the-scenes support role, but al-Sabah has an ambitious vision to make ANOC more visible.

Included in those changes is a new logo, which was approved by the ANOC EB on Monday. There are still several rounds of approval needed before it will be unveiled, but Around the Rings understands the logo will be more dynamic than the one currently used.

On the topic of the ANOC EB meeting, al-Sabah said it was "very successful." Understandably, the focus of the meeting was on the meetings of ANOC’s new commissions. They convened on Saturday.

Al-Sabah said the new ANOC headquarters was expected to open in July and would cost some $20 million.

With civil war still ongoing in Syria, ANOC and the OCA have maintained "good communication" with the Syrian NOC to help support the country’s athletes, al-Sabah said.

"We are preparing a good environment for them," he added.

Also coming to Syrian athletes’ aid are the Chinese and Japanese Olympic committees, both providing scholarships to train in their respective countries.

"In Rio, we will also have some athletes sponsored by Olympic Solidarity," al-Sabah said.

The Olympic Council of Asia executive board made the decision at its meeting, which took place following the ANOC executive council meeting.

Awarded the event in 2013, Sri Lanka has made no progress staging the Games, Hemasiri Fernando, the Sri Lankan Olympic Committee president admitted to ATR.

He said a fight between the sports ministry and NOC has impeded any and all work related to the Games.

Fernando said he made the request because he didn’t want to be embarrassed, but understood OCA’s concerns. He added if the country can’t get its act together, they deserve to lose the Games’ staging rights.