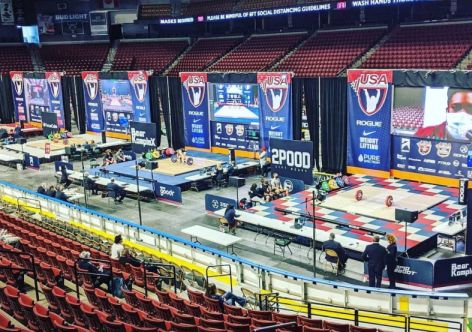 The four-day North American Open Series 1 event was completed on March 7 and featured almost 1000 competitors, with nearly 400 athletes lifting "in person" in Salt Lake City, Utah, and another 600 competing virtually.

It is the first weightlifting event to take place in 2021.

"It’s great to see the athletes and coaches back in action after a prolonged absence due to the pandemic," said USA Weightlifting CEO Phil Andrews.

"The initial survey feedback shows that the event was well received by everyone involved and I anticipate that hybrid events will become a key part of the weightlifting calendar moving forward."

The online option for the competition meant that athletes from as far as Hawaii could take part safely while also vastly reducing their costs to participate.

Athletes that competed in Salt Lake City had to undergo a COVID-19 test before arriving and other necessary measures were in place including the use of face masks and social distancing guidelines.

Strict doping control protocols were also in place both at the venue and at athletes' remote locations.

The next North American Open Series event is scheduled for Calgary, Canada in September 2021.

Japan Owns the Podium in Tashkent

Mongolia won two gold medals, the only other country to win more than one during the three-day event that ended March 7.

Nearly 500 competitors from 71 countries took part in the first Grand Slam to be held in Uzbekistan.

While Japan took the lion’s share of the gold medals, 24 countries did finish on the podium and a total of 35 were represented in the final block during the competition.

The hosts did not top any of the podiums but did win six medals, including two silver.

The International Judo Federation will organize the world championship in Budapest in early June.

The 2021 Karate 1-Premier League Rabat has been postponed due to the COVID-19 pandemic.

The tournament, which was to be an Olympic qualifier, has been moved to October 29-31.

The World Karate Federation announced that the 2021 Karate 1-Premier League Lisbon would replace Rabat as an Olympic qualifying event.

Karate athletes will have the opportunity to add points to the Tokyo Olympic Standings at the Lisbon tournament, which runs from April 30 to May 2 in the Portuguese capital.

The qualifying process for sport climbing’s Olympic debut at Tokyo 2020 is now complete.

The International Federation of Sport Climbing (IFSC) announced this week that the final two quota places for Tokyo had been awarded.

South Korea’s Jongwon Chon and Chaehyun Seo qualified through their respective placings in the Combined event at the IFSC Climbing World Championships Hachioji 2019 – where Seo finished 13th in the women’s event and Chon 20th in the men’s event.

"Today we have concluded our Qualification process: we know the names of our first Olympians and it is a great moment in our history!" commented IFSC President Marco Scolaris on Tuesday.

"The 20 men and 20 women can now focus on Tokyo 2020 and inspire all people involved in the preparation of the Olympic Games, despite the challenges the pandemic has brought."