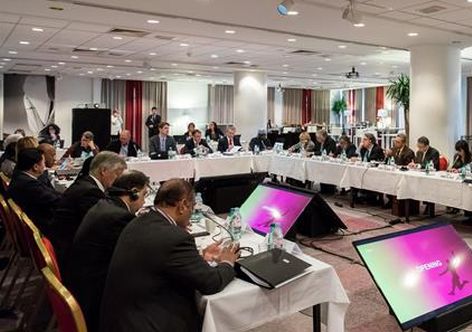 Andersen says Russia could receive provisional reinstatement by the World Anti-Doping Agency in May if the country continues to make progress in changing the sporting and ideological culture that fueled one of the biggest doping scandals in Olympic history. Full reinstatement by WADA could come in November if Russian doping and sport leaders continue making progress, according to Andersen.

"The roadmap outlined clearly states that there will be no reinstatement until the Russian Anti Doping Agency (RUSADA) is functioning," Andersen told reporters during a press conference following the IAAF Council meeting.

"There is one milestone in May to conduct testing, and presumably if everything goes to plan Russia will be fully reinstated by November 2017 which means that Russia as a nation will not be reinstated until that time."

Although the Russian Athletics Federation is still suspended by the IAAF, Andersen notes that Russian athletes may apply to compete as neutral athletes for all international competitions, including the London 2017 World Championships that will be held from Aug. 5-13. The IAAF has received 35 applications from Russian athletes to compete internationally thus far.

"They are trying meter by meter to get to a situation where we get Russian athletes back into clean and secure systems and into international competitions," Coe told reporters. "I’m encouraged by the conversations I’ve had with the taskforce.

"The really important concept here is our ability to separate clean athletes and the potential for clean athletes from a tainted system and that will take time. These are not simply Russian challenges. We needed to draw a line in the sand on behalf of our sport."

The IAAF is halting the process of athletes changing the country they compete for in order to strengthen global competitions.

Under the current rules, athletes may switch their country of allegiance too frequently and to the highest bidder, causing talent to accumulate in a few of the wealthier countries. Coe says the current system is rife with abuse.

"It has become abundantly clear with regular multiple transfers of athletes especially from Africa that the present rules are no longer fit for purpose," Coe said. "Athletics, which at its highest levels of competition is a championship sport based upon national teams, is particularly vulnerable in this respect."

A working group has been formed to come up with proposals to rewrite the rules regarding the transfer of allegiance process chaired by Hiroshi Yokokawa. The group is tasked with creating the new rules by no later than the end of the year.

"The present situation is wrong. What we have is a wholesale market for African talent open to the highest bidder," said Hamad Kalkaba Malboum, Africa Area Group Representative on the IAAF Council.

"Our present rules are being manipulated to the detriment of athletics’ credibility. Lots of the individual athletes concerned, many of whom are transferred at a young age, do not understand that they are forfeiting their nationality. This must end and a new way forward found which respects the athletes’ rights and the sports’ dignity."

The new rules will not affect the 15 transfers of allegiance currently being processed by the IAAF.

The new selection process, which will commence with the awarding for events after 2021, will have the IAAF "assess the strategic goals for growing the sport in relation to each IAAF competition, targeting cities from countries and regions which will best assist the delivery of those aims."

The idea is to create a partnership "matching the hopes and ambitions of potential hosts with those of the IAAF."