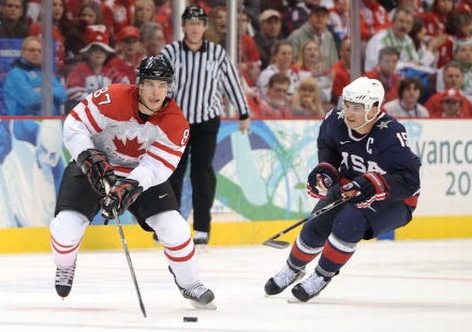 VANCOUVER, BC - FEBRUARY 28: Sidney Crosby #87 of Canada plays the puck through the neutral zone on the offensive rush past Jamie Langenbrunner #15 of USA several seconds before scoring the match-winning goal in the first overtime during the ice hockey men's gold medal game between USA and Canada on day 17 of the Vancouver 2010 Winter Olympics at Canada Hockey Place on February 28, 2010 in Vancouver, Canada. Canada defeated USA 3-2 in overtime. (Photo by Harry How/Getty Images)

The National Hockey League hopes to decide whether to send its players to the 2018 Winter Olympics within the next six months.

The league negotiated with the IOC for nearly four years before agreeing to send players to Sochi. Both sides are hoping for a quicker resolution for PyeongChang.

"It should not take all that long," said NHL deputy commissioner Bill Daly, "but I would have said the same thing coming out of 2010."

"We will have a broader discussion with the players’ association on international competition and what we are doing internationally," Daly told Reuters. "That discussion is under way, so I would expect a quick resolution in respect to the Olympics, maybe six months."

Factors the NHL must weigh include whether the Games make financial sense for the league, which must shut itself down for two and a half weeks to accommodate its players’ participation in a tournament over which it has no control.

"We are much more visible on the worldwide stage," said Daly, "so we are at a different stage in our evolution and development than we were in 1998."

The Nagano Games were the first to which the NHL sent its players.

South Africa’s Olympic Committee says a cyclist who had hoped to compete in the Commonwealth Games has died in a training accident.

Jeanne Nel was a former national sprint, time trial, and Keirin champion. He crashed on Tuesday at a velodrome in Bellville, near Cape Town.

Nel was "one of the best sprinters South Africa has ever had … a true champion lost to South African cycling," cycling coach Ricky Kulsen told the Associated Press.

NBC host Bob Costas will again be on the sidelines for Wednesday night's broadcast as he battles an eye infection.

Matt Lauer, who filled in on Tuesday, will helm the telecast for a second straight night. Last night, Lauer became the first person other than Costas to host a prime time Olympic broadcast on NBC since 1988.

"Bob is America's Olympic host," said NBC Sports chairman Mark Lazarus in a Wednesday conference call. "When he's not here, it's a story. No one's more frustrated or bothered by [his absence] than him."

Lazarus said Costas is resting at the hotel in a dark room. His status will be reassessed on a day-to-day basis.

Mary O’Conner has taken a position with The Marketing Arm as senior vice president of Olympic marketing for global platforms and hospitality.