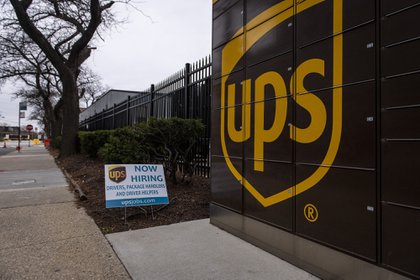 A "Now Hiring" sign outside a United Parcel Service Inc. (UPS) distribution center in Chicago, Illinois, U.S., on Monday, Nov. 30, 2020. Online shoppers in the U.S. are expected to drop a record-busting $12.7 billion on Cyber Monday -- the busiest e-commerce day of the year -- presenting a valuable opportunity for retailers whose websites, customer service departments and delivery operations can withstand the period of crushing traffic. Photographer: Christopher Dilts/Bloomberg

(Bloomberg) -- United Parcel Service Inc. agreed to sell its short-haul trucking business for $800 million, the first substantial move in the “better-not-bigger” strategy that Carol Tome developed since taking over as chief executive officer in June.

Canada’s TFI International Inc. will acquire the unit, one of the largest less-than-truckload carriers in the U.S., UPS said in a statement Monday. The eight-decades-old unit, separate from the package-delivery operation for which UPS is known, is primarily a business-to-business enterprise hauling large industrial cargo in big trucks.

“The agreement allows UPS to be even more laser-focused on the core parts of our business that drive the greatest value for our customers,” Tome said in the statement. UPS will take a $500 million charge related to the sale, which is expected to be concluded in the second quarter.

Tome has pledged to increase return on capital investment by focusing on the core business, brand and culture while maintaining UPS’s dividend and investment-grade credit rating. Everything else is under review, she said in a July conference call.

The sale won’t affect the package-delivery business’s operations and will raise the company’s operating margin by 0.2 percentage point, UPS said.