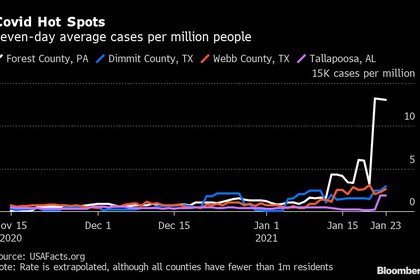 (Bloomberg) -- U.S. Covid-19 cases and hospitalizations are receding from recent highs, but discrete outbreaks are still raging in places such as the Texas-Mexico border and parts of Alabama. The pattern provides a preview of how the pandemic may look during the months to come.

The seven-day average of Covid-19 cases fell to 167,240, the lowest since Dec. 2, according to Covid Tracking Project data. For the first time since October, no state had more than 1,000 average daily cases per million residents, the data show.

But even as the U.S. enters its latest downswing and the vaccination push expands, the country is still a long way from herd immunity and there are dangerous hot spots across the country. Among the worst were Pennsylvania’s Forest County, where a prison outbreak has led to soaring cases; an Alabama county in the lower Appalachians; and a swath of border towns near Laredo, Texas.

Nationwide, the drop in cases has been a welcome reprieve for health-care workers. The number of people hospitalized with the virus fell to 110,628 on Sunday, the lowest since Dec. 14.

In the past week, an average of 1.16 million daily doses of vaccines for Covid-19 were administered in the U.S., with 22 million doses administered overall, according to the Bloomberg Vaccine Tracker. But Anthony Fauci, director of the National Institute of Allergy and Infectious Diseases, has estimated that the U.S. needs to vaccinate more than 70% of its 330 million people to return to a degree of normality.

There had been more than 419,000 Covid-19 deaths reported in the U.S. as of early Monday, Johns Hopkins data show.

According to Covid Tracking Project data: