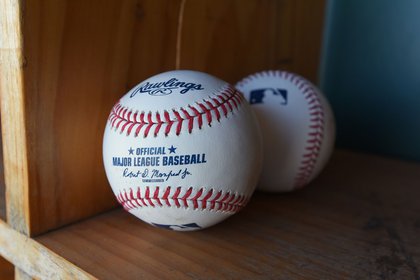 LAKELAND, FL - MARCH 01: A detailed view of a pair of official Rawlings Major League Baseball baseballs with the imprinted signature of Robert D. Manfred Jr., the Commissioner of Major League Baseball, sitting in the dugout prior to the Spring Training game between the New York Yankees and the Detroit Tigers at Publix Field at Joker Marchant Stadium on March 1, 2020 in Lakeland, Florida. The Tigers defeated the Yankees 10-4. (Photo by Mark Cunningham/MLB Photos via Getty Images) Photographer: Mark Cunningham/Getty Images North America

(Bloomberg) -- Arizona’s Cactus League is asking Major League Baseball to consider postponing next month’s start of spring training, with that state and fellow preseason site Florida both reeling from the surge of Covid-19 cases.

“We believe it is wise to delay the start of spring training to allow for the Covid-19 situation to improve here,” the Cactus League’s executive director and nine local leaders said in a letter to MLB Commissioner Rob Manfred.

Last year, MLB and the player’s association agreed to a shortened, 60-game season after the virus halted spring training in its tracks. Delaying the 2021 season would require the two sides to once again come to an agreement, which may be a tall task given the history of player and ownership negotiations.

The two sides aren’t currently in talks about a possible delay, the Athletic reported Monday.

The Cactus League is home to 15 teams, including the Chicago Cubs, Los Angeles Dodgers and San Francisco Giants.

Arizona has the most cases in the country per 100,000 people over the last seven days, according to the CDC. Florida recently saw its daily Covid-19 death toll tie a record last hit in August.

KPNX-TV, an NBC affiliate in Arizona, earlier reported on the letter from the Cactus League.

Other professional leagues have pushed forward in Arizona and Florida. The National Basketball Association and National Hockey League are still playing games in both states. Tampa, Florida, is set to host the Super Bowl on Feb. 7, between the hometown Tampa Bay Buccaneers and the Kansas City Chiefs.