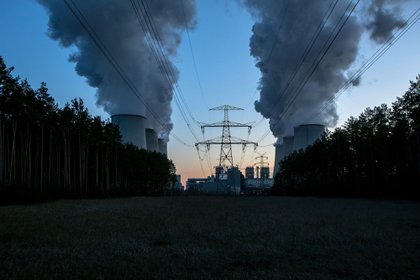 (Bloomberg) -- The first cold blast this winter that propelled European power and gas prices to their highest levels in years may be about to dissipate, but its impact will be felt for months to come.

From a snow storm in Madrid to record spikes in the U.K. power market as wind dropped -- the weather has been the main driver behind the rally. Bullish gas price forecasts from Goldman Sachs Group Inc. and Wood Mackenzie Ltd. indicate that the wild ride might not be over just yet.

“It’s been a very exciting start to the year and there’s every chance that the next few weeks and months will be extremely volatile too,” said Bo Palmgren, chief operating officer at Danish trading company MFT Energy A/S in Aarhus.

It’s a stark change from a year ago when the pandemic paralyzed industrial activity and even spurred talk of gas prices following oil below zero because of an unprecedented glut. An increase in the roll out of vaccines may also drive economic recovery and spur demand.

A relatively rare weather phenomenon with the potential to disrupt the polar vortex -- the winds that usually keep cold air contained in the far north -- is threatening to send a further Arctic blast across North America, Europe and Asia from late January.

People turning up their heating could increase the depletion rate at the region’s gas stores going into spring. The knock-on effect is that summer prices will be buoyed by the demand to fill depleted fields and salt caverns ahead of next winter.

“The current cold spell in the northern hemisphere is paving way for a tighter global gas market throughout the year,” said Massimo Di Odoardo, director of European gas at WoodMac.

Goldman on Wednesday raised its forecast for the Dutch month-ahead contract, the regional benchmark, by 19%. Woodmac expects the average price to be 75% higher than last year, it said on Thursday.

If the cold weather persists over the next month, power prices in Germany and the Nordic market could gain as much as 10% because of the hike in demand, said Arne Bergvik, chief analyst at Swedish utility Jamtkraft AB.

Except for a balmy start to next week, temperatures in northwest Europe are mainly forecast below seasonal norms for the next month. That should support everything from gas to power and carbon futures, which all reached new highs last week. The region’s normally steady supply of liquefied natural gas cargoes could also sail away to Asia, where gains beat even the Bitcoin rally to new highs.

The past week showed what the volatility is all about. An 18% jump on Tuesday in the benchmark contract was followed by the biggest plunge ever a day later. Prices moved at least 10% from the five-day average on 66 occasions over the last year, according to ICE Endex.

While traders love that kind of volatility, it could also work as a deterrent for some new consumers, said Nikos Tsafos, a natural gas analyst at the Center for Strategic and International Studies in Washington.

Despite the possibility for many more weeks of a demand-zapping lockdown in Germany, power prices in Europe’s biggest market are headed for the most expensive February since 2008. The Nordic market is even more bullish after prices jumped 39% this year. A smaller premium could potentially reduce the usual flows of power to the continent from the Nordic region.

“We have a completely reversed situation at the start of 2021 compared with a year ago when the weather was mild and wet,” said Arne Bergvik, chief analyst at Swedish utility Jamtkraft AB. “If the cold and dry weather continues prices should go up.”