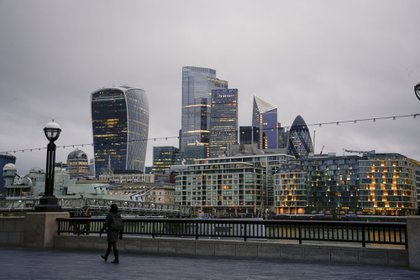 Skyscrapers in the square mile financial district of the City of London, U.K., on Monday, Jan. 4, 2021. Britain's long-awaited trade deal with the European Union still leaves many questions unanswered for the world's biggest banks, trading venues and money managers as they prepare for a rupture in the region's financial system.

(Bloomberg) -- London financiers are keeping the faith that despite being left out of the Brexit trade agreement, their industry can win back access to the European Union in the next round of talks.

In a poll of hundreds of executives at banks, money managers and insurers by the consulting firm EY one week after Britain fully left the EU, 76% said they expected the EU would grant some form of equivalence decisions, opening the doors to more market access. Just 8% expected a more sweeping equivalence pact allowing London bankers to do many forms of trading, and 15% predicted no equivalence rulings at all.

The U.K. government said Tuesday that it will start a new round of talks with the EU on regulatory cooperation. The EU side has cautioned, however, that London shouldn’t expect quick decisions, and that the talks could drag on -- especially if the U.K. diverges from European rules.

While the U.K. started 2021 with an almost identical set of rules as the bloc following a post-Brexit transition period, British officials are contemplating changes in a number of areas.

Only 26% of respondents in the poll, which was conducted during a webinar, said they expected their firms to relocate U.K. staff to the EU this year. Only 3% said the moves would be significant.

“Many of the moves to the continent have already happened, and as we know, the numbers to date have been smaller than many forecast over four years ago,” said John Liver, a U.K. financial-services partner at EY.