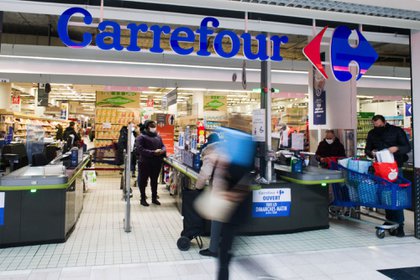 Shoppers at check-out counters of a Carrefour SA supermarket in Paris, France, on Wednesday, Jan. 13, 2021. Alimentation Couche-Tard Inc., the Canadian convenience-store operator that owns the Circle K chain, is exploring a takeover of French grocer Carrefour SA, a deal that would create a trans-Atlantic retail giant.

The owner of Circle K made an initial proposal valuing Carrefour at about $20 billion, people with knowledge of the matter said. After adding in the grocer’s net debt, the deal is set to surpass Swiss cement maker Holcim Ltd.’s acquisition of French rival Lafarge SA, which had an enterprise value of about $35 billion, according to data compiled by Bloomberg.

Couche-Tard is making a bold bet that it can succeed where others have failed. Large cross-border bids for French companies are relatively rare, with just a handful announced over the past decade. Many would-be acquirers have been turned off by fears of opposition from French politicians, who frowned on talk of an approach from PepsiCo Inc. to yogurt maker Danone SA in 2005.