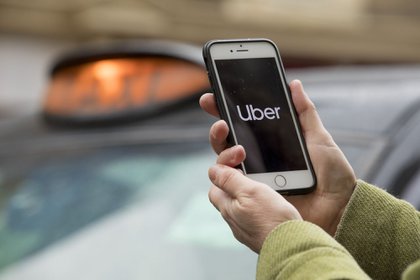 A commuter uses the Uber Technologies Inc. app on a smartphone in view of a black cab waiting to pick up passengers in this arranged photograph in London, U.K., on Monday, Nov. 25, 2019. Uber lost its license in London for the second time in less than three years, putting one of its biggest markets outside of the U.S. at risk after the transport regulator said it failed to address safety concerns. Photographer: Jason Alden/Bloomberg

(Bloomberg) -- Ride-hail and delivery drivers are suing to invalidate the California ballot measure approved in November that declared them independent contractors, the latest volley in the state’s years-long struggle over whether gig workers are employees.

The Service Employees International Union and a group of drivers for Uber Technologies Inc., Lyft Inc., DoorDash Inc. and Instacart Inc. filed a petition Tuesday in the California Supreme Court, according to an SEIU spokesperson, claiming that Proposition 22, the measure the gig companies spent $200 million to place on the ballot and get approved by voters, violates the state’s constitution.

The measure designates app-based drivers as contractors under state law -- rather than employees entitled to protections like sick pay and worker’s compensation –- though it provides for some alternative benefits. It also prohibits the legislature from making amendments without at least seven-eighths support, including by passing laws letting unions negotiate on behalf of drivers.

According to a copy of the complaint provided by plaintiffs lawyer Scott Kronland, the drivers argue that Proposition 22 unconstitutionally usurps the legislature’s authority over worker’s compensation, as well as the judiciary’s authority to dictate what counts as an “amendment” to a ballot measure. They also claim that the measure violates the constitutional requirement that each measure be limited to a single subject.

“If allowed to stand, the ploy will be repeated in other initiatives as an effective means to slip potentially unpopular provisions past the voters through the sleight of hand of defining what constitutes an ‘amendment,’” according to the complaint.

The filing couldn’t immediately be confirmed in court records.