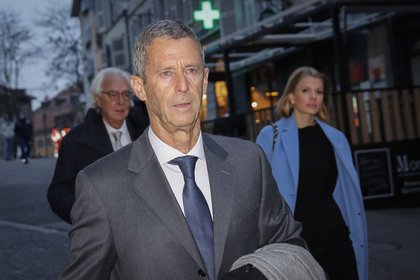 (Bloomberg) -- Beny Steinmetz’s lawyer went on the offensive in the first day of the Israeli businessman’s trial for bribery, demanding evidence that a prosecutor gathered from “secret” trips to Israel be purged from the indictment.

Marc Bonnant blasted Swiss prosecutor Claudio Mascotto for refusing to disclose who he met in Israel in 2017, who covered his costs and why the trips were never disclosed to the court before it was reported in the Israeli newspaper Haaretz.

“It’s not acceptable that we don’t know who paid” and that “we can only hypothesize,” Bonnant told the court in Geneva on Monday morning. “These questions demand an answer.”

Steinmetz and two co-defendants are accused of paying the wife of Guinea’s deceased former president Lansana Conte $8.5 million to secure the concession rights to a vast mountain of iron ore worth billions of dollars in the country’s south. The trio are also accused of forgery for allegedly creating share structures to hide the bribes. The trial is taking place in Geneva as Steinmetz lived there until 2016 and had businesses there.

Mamadie Toure, Conte’s wife, reached a non-prosecution agreement in the U.S., in a related corruption probe in return for providing testimony there. Without knowing the context of that agreement, the U.S testimony should not be used in the Geneva case, said Camille Haab, another lawyer for Steinmetz.

Steinmetz’s lawyers have said that they have not had a chance to question Toure since the case began in 2013, and it’s vital they do so during the trial.

Toure is scheduled to appear as a witness on Wednesday, but it’s not clear if she will attend. A New York lawyer who previously represented Toure declined to comment and separate attempts to reach Toure were unsuccessful.

The trio of defendants organized bribes to secure the rights to the Simandou mine just weeks before Conte’s 2008 death, Swiss prosecutors allege. The concession’s previous owner, Rio Tinto Group, lost the rights after failing to develop the site, putting the asset into Steinmetz’s hands.

Steinmetz did nothing wrong, Bonnant said. He repeated in his opening remarks on Monday that the indictment has serious flaws. Though Toure is widely referred to as one of Conte’s wives, Bonnant said she was never married to Conte and thus can’t be considered a public official.