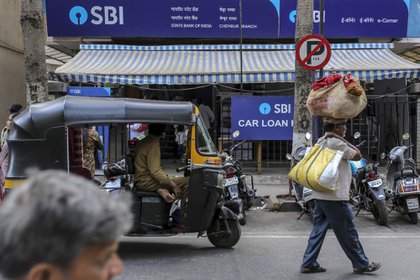 Pedestrians and an auto-rickshaw pass a State Bank of India Ltd. (SBI) branch in Mumbai, India, on Friday, March 6, 2020. SBI has been selected to lead a consortium that will inject new capital into Yes Bank Ltd., people familiar with the matter said, after the Indian government stepped in to organize a rescue plan. Photographer: Dhiraj Singh/Bloomberg

(Bloomberg) -- Three Indian borrowers have already sold dollar bonds so far this year, riding a strong wave of global deals and making it the strongest start to a year ever for the country’s issuers.

The firms have priced $2.1 billion of dollar bonds. They are joining borrowers globally that have been rushing to credit markets, after yields crashed following cash-boosting measures by authorities to keep economies afloat amid the pandemic.

State Bank of India, regarded as a proxy for the sovereign in the international debt markets, sold $600 million of notes. The state-run lender priced the deal at 140 basis points over U.S. Treasuries, its tightest spread since 2004.

Thanks to strong demand for debt globally as investors put cash to work, Indian companies have been able to tap the market even amid an uneven rebound in Asia’s third-largest economy. Growth contracted 7.5% in the three months through September, after a record 24% slump in the April-June period.

For now, money managers have focused more on the signs that the economy may be putting the worst behind it, following unprecedented stimulus. Dollar-denominated bonds from Indian issuers returned 4.7% last quarter, the most among Asia’s major economies, according to Bloomberg Barclays indexes.

Other issuers from India so far this month are Export-Import Bank of India and Shriram Transport Finance Ltd.