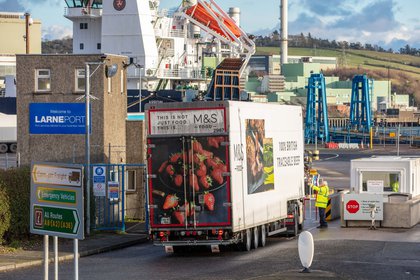 A haulage truck, operated by Marks & Spencer Group Plc, arrives at Larne Port in Larne, Northern Ireland, U.K., on Monday, Dec. 7, 2020. U.K. Prime Minister Boris Johnson warned a time may be coming to recognize that Brexit negotiations have failed, as he prepares to travel to Brussels for crisis talks on a future trade deal.

(Bloomberg) -- Marks & Spencer Group Plc is experiencing some shortages of products in its stores in the Republic of Ireland as it grapples with new customs systems following Brexit.

The clothing and homewares retailer blamed the gaps, some of which have involved sandwiches and fresh produce, on “transitioning to new processes” following the U.K.’s recent departure from the European Union.

“It is taking a little longer for some of our products to reach our stores” and M&S is working with its suppliers and partners to resolve the issue, a spokesman said in an emailed statement. The London-based chain’s French shops have also been experiencing shortages of some items.

Although a trade deal between the EU and the U.K. has averted the imposition of tariffs on food, goods traveling between Great Britain and the Republic of Ireland are now subject to customs checks and more red tape. As yet, there’s been little sign of major shortages stemming from Brexit.