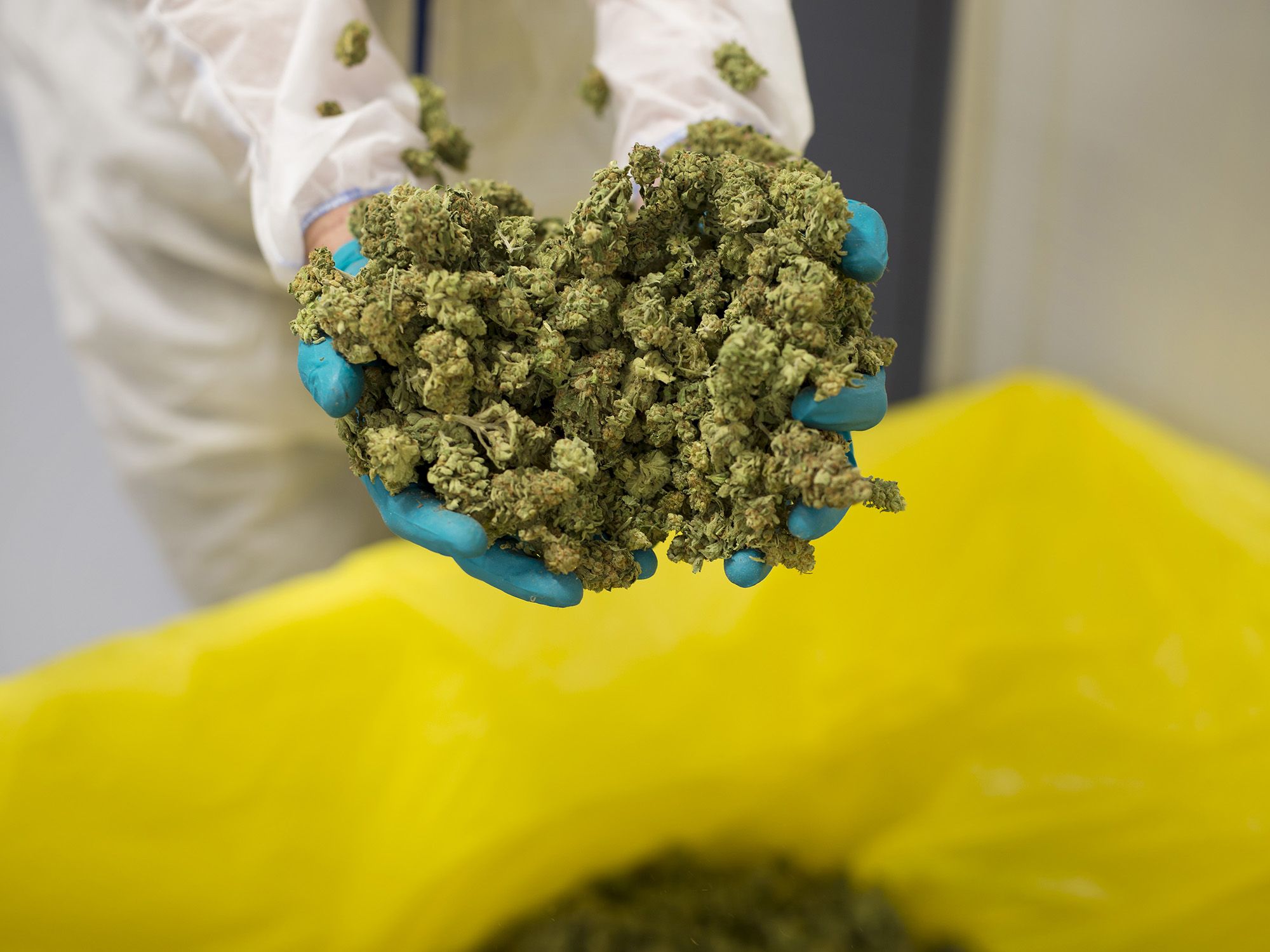 (Bloomberg) -- JPMorgan Chase & Co. and other large U.S. banks climbed Wednesday, along with shares of solar, clean-energy and cannabis companies, after the Democrats closed in on control of the U.S. Senate.

A sweep would give President-elect Joe Biden more clout to enact policies such as more pandemic aid, increased government spending and support for renewable power. That’s boosting Treasury yields and reflation trades, and helping lenders and construction firms. On the other hand, shares of large technology companies, which may face stiffer regulation, were under pressure.

In Washington, the Capitol was placed under lockdown as hundreds of protesters swarmed past barricades surrounding the building where lawmakers had been debating Biden’s victory in the Electoral College.

Though expectations Democrats would win had crept up in the days before the Tuesday runoffs, investors had generally seen Republicans as holding one or both of the seats. That meant there was room to run for stocks linked to a so-called Blue Wave of Democrats controlling the White House and both chambers of Congress.

Here are some of the sectors that were moving on Wednesday:

More fiscal stimulus was seen helping banks, as it would probably spur economic growth and boost the likelihood of more lending, while lessening potential credit losses. Concern about greater prospects for tighter regulation, attacks on Wall Street and calls to break up the biggest lenders may have eased as the Georgia outcome was seen as boosting moderates.

Wells Fargo analyst Mike Mayo reiterated his buy ratings on banks, writing in a note that the “two key words are stimulus and steepener,” which in turn will boost “rates, reflation, and recovery.” That’s good for spread lenders, especially Bank of America Corp., Citigroup Inc. and JPMorgan, he said.

On the other hand, Height Capital Markets analyst Edwin Groshans warned that a Senate under Democratic control would mean Biden’s nominees will be confirmed regardless of their agendas, which is “especially negative” for consumer finance companies.

Solar-panel makers and other clean-energy companies gained on the possibility of more green spending. Biden has proposed a $2 trillion plan to achieve a carbon-free power sector by 2035.

“Clean-power policies are far more popular than Republican Senate leadership are willing to admit, so a Democratic win in Georgia could pave the way for Biden to aggressively push for a clean-energy package,” said Katie Bays, managing director at FiscalNote Markets, a policy consulting company.

Even though there’s concern about new fracking regulations, the risk is low, with the “critical exception of fracking on federal lands, where Congress might expedite a return to the Obama-era rules,” Capital Alpha analyst James Lucier wrote in a note on Tuesday.

A Blue Senate is bullish for the electric vehicle sector, Wedbush analyst Daniel Ives wrote on Wednesday, adding that a more green-driven agenda is now “certainly in the cards for the next few years.”

Tesla Inc., which also got a price target boost at Morgan Stanley, tacked on as much as 5.3%, and Nikola Corp. added 5.4%.

A Biden team might also be “more dubious” toward cryptocurrencies, and may make fresh demands for consumer protection and anti-money laundering compliance, according to Cowen analyst Jaret Seiberg. That could boost the chances for a Federal Reserve digital dollar, and may be negative for Bitcoin and Facebook’s “Diem” project. Square Inc. reversed early losses to rise as much as 1.6%; the firm had warned that the Financial Crimes Enforcement Network’s possible requirements for cryptocurrency service providers would obscure transactions, impair law enforcement and limit American innovation.

Construction and materials companies would be set to gain with a greater likelihood of more infrastructure stimulus and government spending. “Infrastructure is one issue with relatively high bipartisan support,” while Democrats might prioritize infrastructure spending over other agenda items like climate change and tax rates, according to Citi analyst Anthony Pettinari.

He flagged companies including Vulcan Materials Co. and Martin Marietta Materials Inc., which both climbed about 10% to records, along with Fluor Corp., which gained more than 9%. Caterpillar Inc. rallied more than 7%, also to a record.

Gun makers Smith & Wesson and Vista Outdoors soared 14% or more. In a research report, Cowen analyst Cai von Rumohr said Biden’s presidential win, a potential Democratic flip in Georgia and below-average inventories are catalysts for the industry. “Biden presidency, and possible Democratic flip in Georgia, may lead to more gun regulation rhetoric even if legislative action is hard to achieve under a split government,” he wrote.

Among health insurers, those most tilted to government-sponsored health plans, Centene Corp. and Molina Healthcare Inc., outperformed as investors weighed a potential expansion of Obamacare. Both rose more than 9%.

“Some degree of a Democrat-sweep outcome has already been getting pre-traded,” said Goldman Sachs sector strategist Asad Haider.

Here’s a sample of the latest analyst commentary:

“Another Covid-relief bill is probably 6 months away, if then, but there could be a push in January or February to pass $2k checks for individuals,” Gardner wrote in a note. He also sees Senate hearings as likely to now focus on sectors including “health care and pharma, tech and Silicon Valley, energy (anything climate-related) and Wall Street.”

At the same time, he added that the “Green New Deal, court-packing and other progressive agenda items will not pass in this Congress.”

Doesn’t expect Democrats will be “as aggressive on raising corporate tax rates as might be anticipated, potentially delaying action and tying it to economy boosting spending.” Noted that Democrats will be constrained by tight margins in both chambers.

“The nomination process for Biden appointees would be far easier and the odds of additional fiscal stimulus move meaningfully higher” with Democratic control of the Senate, Boltansky wrote. A clearer path for nominees could lead to a “more aggressive administrative agenda,” he said.

At the same time, he added that Biden’s campaign proposal on taxes “would need to be meaningfully moderated given the cohort of red state centrist Democrats in the Senate.” Plus, “narrow majorities and ideological fissures within the Democratic Party suggests that sweeping progressive legislation remains unlikely.”

If Democrats win the second Georgia Senate seat and hold very narrow House and Senate majorities, “Biden is unlikely to be negotiating with Congressional Leadership but instead with Congressional moderates,” Miller wrote. “This means more policymaking is possible, but what passes is likely to trend more toward the political center in order to become law.”

A 50-50 Senate would “scramble the playbook investors have relied on the last 6-10 years where Congressional leaders were pivotal players,” Vogel wrote. “They will still be leaders, but the center aisle will be the location for many key decisions. Financial markets will misread politics more than usual this year – so, opportunities and confusion are on the menu.”

“Statements and actions by the Biden transition will be key in establishing the medium-term market reaction,” Mills wrote. “There will be growing optimism for additional stimulus, especially for individual payments and infrastructure spending.”