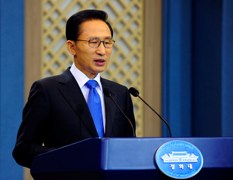 Korean president Myung Bak Lee says the IOC vote in Durban is a win not just for PyeongChang but for Asia as a whole.

The entire continent is to thank, he said during Wednesday’s regular radio address, insisting the support of Asia was critical to the success of PyeongChang.

He also assured the Olympics would give South Korea an economic boost while calling for unity during the build-up to the Games, a possible reference to the push among lawmakers for a joint Olympic team with North Korea come 2018.

Lee returned to South Korea on July 11 after a whirlwind diplomatic trip throughout Africa. Along the way, heads of state congratulated him for PyeongChang’s victory.

Newly crowned Olympic host city PyeongChang is the site for this week’s annual congress of the international bobsleigh and skeleton federation.

Members of the FIBT executive committee met Thursday in Seoul before heading east for Friday and Saturday’s proceedings.

Tops on the agenda for the two-day affair are a tour of existing Olympic facilities in PyeongChang as well as the selection of a host city for the 2015 world championships.

Winterberg, Germany is so far the only bid, but cities have until Saturday – also decision day – to submit their applications. Winterberg staged the worldchamps in two-man and four-man bobsleigh once and in women’s bobsleigh twice but has never held the combined championships.

This will be the first congress run by FIBT president Ivo Ferriani, who won office last September in the federation’s first contested presidential election since 1994.

Lofty economic predictions for the 2018 Games are published in news outlets worldwide, but a Korean expert economist tempers the excitement, and offers a perhaps more realistic forecast for the Games.

Myong Bok Bae, an editorial writer for Korea’s Jong Ang Daily, says PyeongChang’s victory showed all Koreans can unite behind a single cause, and he hopes the country keeps that unity moving forward.

South Korea must invest in winter sports to avoid embarrassment at the 2018 Olympics, according to an editorial in The Dong-A Ilbo.

Protestants in Korea are taking credit for the PyeongChang victory – thanks to their prayers. President Lee is among Korea’s protestant faithful.