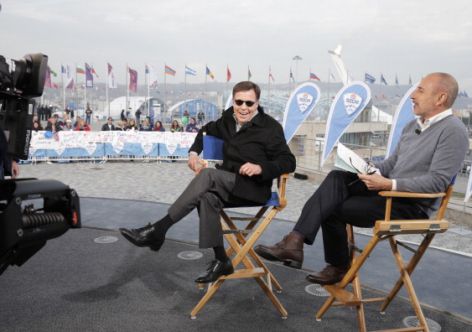 Costas said during one of the Games broadcasts that Putin is head of a government "which imprisons dissidents, is hostile to gay rights, sponsors and supports a vicious regime in Syria, and that’s just a partial list.

"No amount of Olympic glory can mask those realities."

The veteran sportscaster was criticized by some for making a political statement at what is ostensibly a non-political event. Costas, however, says the quote was taken out of context.

"This was not a profile of Putin," said Costas on FOX News. "It was a set up to a conversation in which Putin would immediately be called an autocrat."

When asked why delve into the issues, Costas said it was necessary to "frame the backdrop" of the Games.

"The 1984 Olympics weren’t Ronald Reagan’s Games. They were Peter Ueberroth’s. The 1996 Olympics were Billy Payne’s, not Bill Clinton’s. The 2002 Olympics were Mitt Romney’s, not George Bush’s.

"These were Putin’s Games."

German bobsled driver Manuel Machata was banned from racing for one year after aiding a competitor in Sochi.

The German bobsled federation handed down the punishment after learning that Machata, who did not qualify for the Olympics, lent his bobsled runners to Russia’s Alexander Zubkov for a fee.

The federation, according to the AP, called "the relatively hard punishment" a "first step to defend national interests."