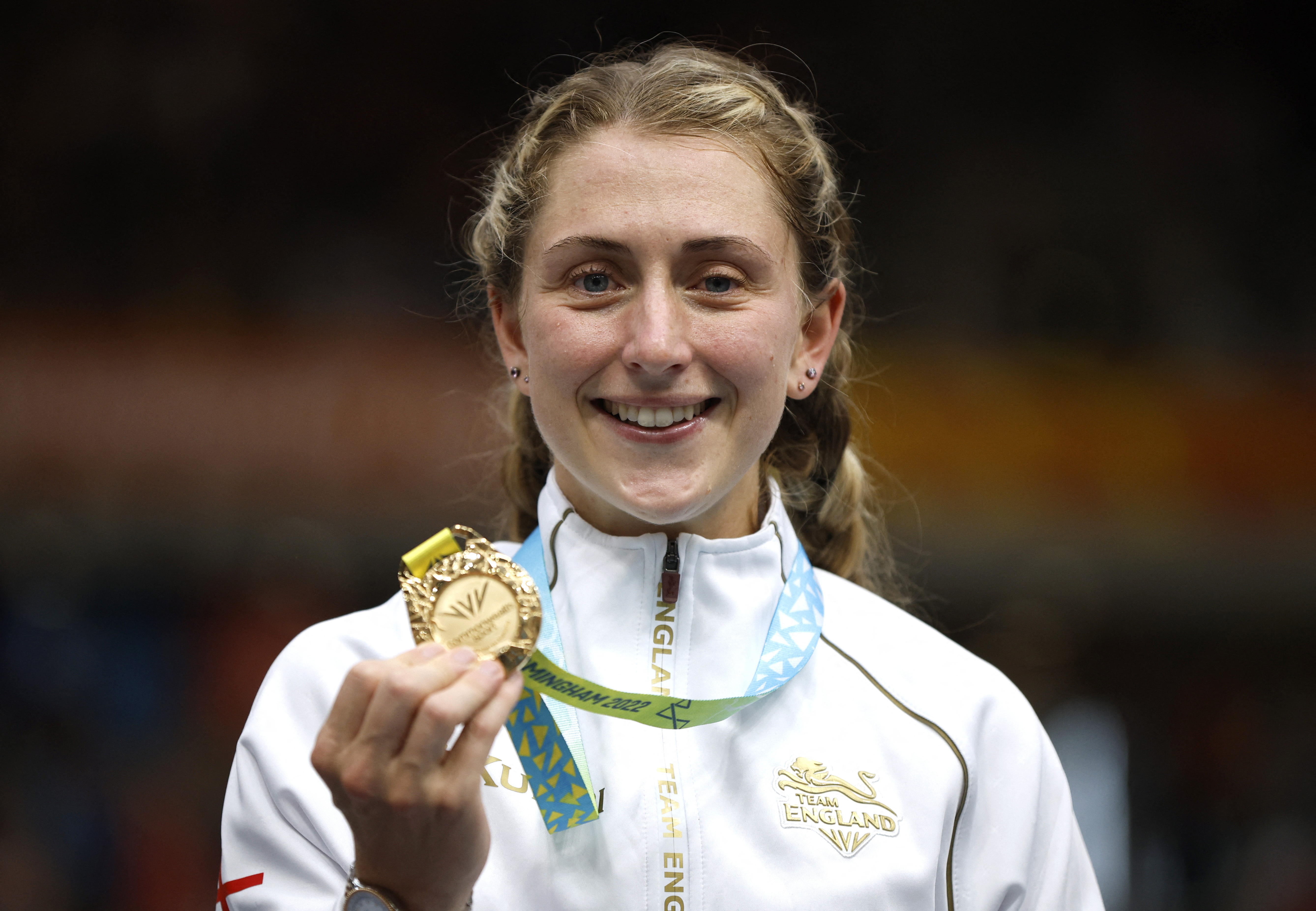 Five-time Olympic champion Laura Kenny called for increased safety measures in track cycling after a “horrendous” crash sent three riders to the hospital on Sunday. The incident occurred during the ongoing Commonwealth Games in Birmingham, England.

Kenny, who was scheduled to compete in three races at the Games, said the crash made her question whether or not she should take to the track for her second race.

“It was horrendous,” she said. “It was playing on my mind earlier, I messaged Jason [her husband] and said: ‘I’m not sure I even want to do this.’ It just puts everything into perspective when something like that happens.”

Photos of the incident show English cyclist Matt Walls careening over the railing and into spectator seating during the second heat of the men’s scratch race. Canadian cyclist Derek Gee can also be seen riding dangerously close to the top of the railing. 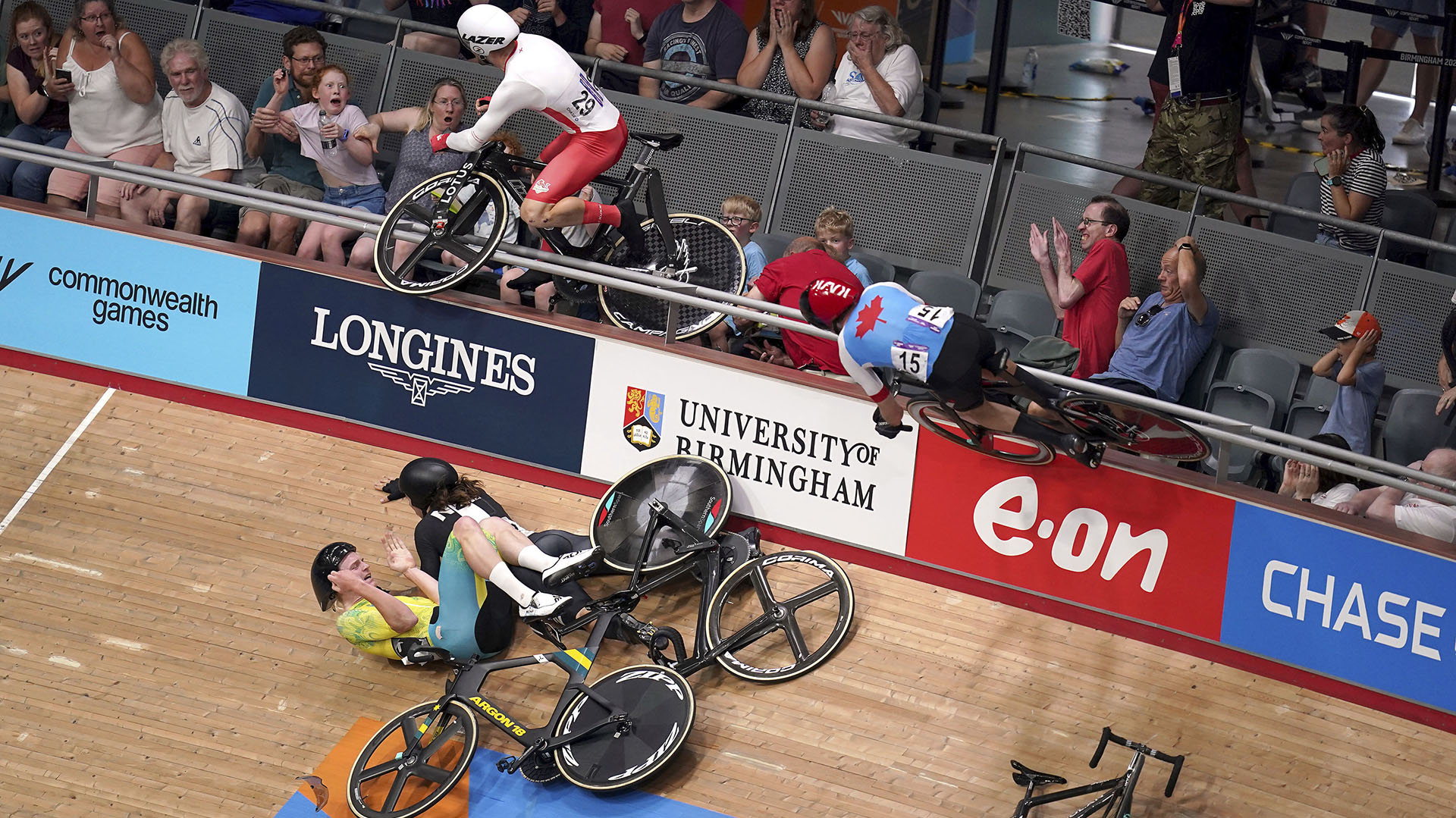 General view of a crash in the Men's 15km Scratch Race Qualifying Round as England's Matt Walls, top left, and Canada's Derek Gee, right, go over the barrier into the crowd at Lee Valley VeloPark on day three of the 2022 Commonwealth Games in London, Sunday July 31, 2022. ( John Walton/PA via AP)

The crash involved multiple riders and ultimately resulted in the morning session of the sport being suspended. Two spectators were treated for injuries sustained as a result of the incident by medical staff at the Lee Valley Velodrome according to a statement from Birmingham 2022.

Walls remained in spectator seating for around 40 minutes while his injuries were tended to by medical staff according to The Guardian. He was later taken to the hospital for further examination and treatment, along with Matthew Bostock of the Isle of Man and Derek Gee of Canada.

Racing resumed in the afternoon, with Kenny taking to the track for the women’s points race.

Walls later posted a statement on his Twitter account that read, “I’ve somehow come away with no serious injuries just a few stitches and pretty banged up.”

Kenny stated her relief about his condition, saying, “I’m just glad he was conscious straight away because Joe’s crash was enough.”

Joe Truman of England had been knocked unconscious during a crash the day prior. A collision with Australia’s Matthew Glaetzer during the men’s keirin left Truman with a broken collarbone. 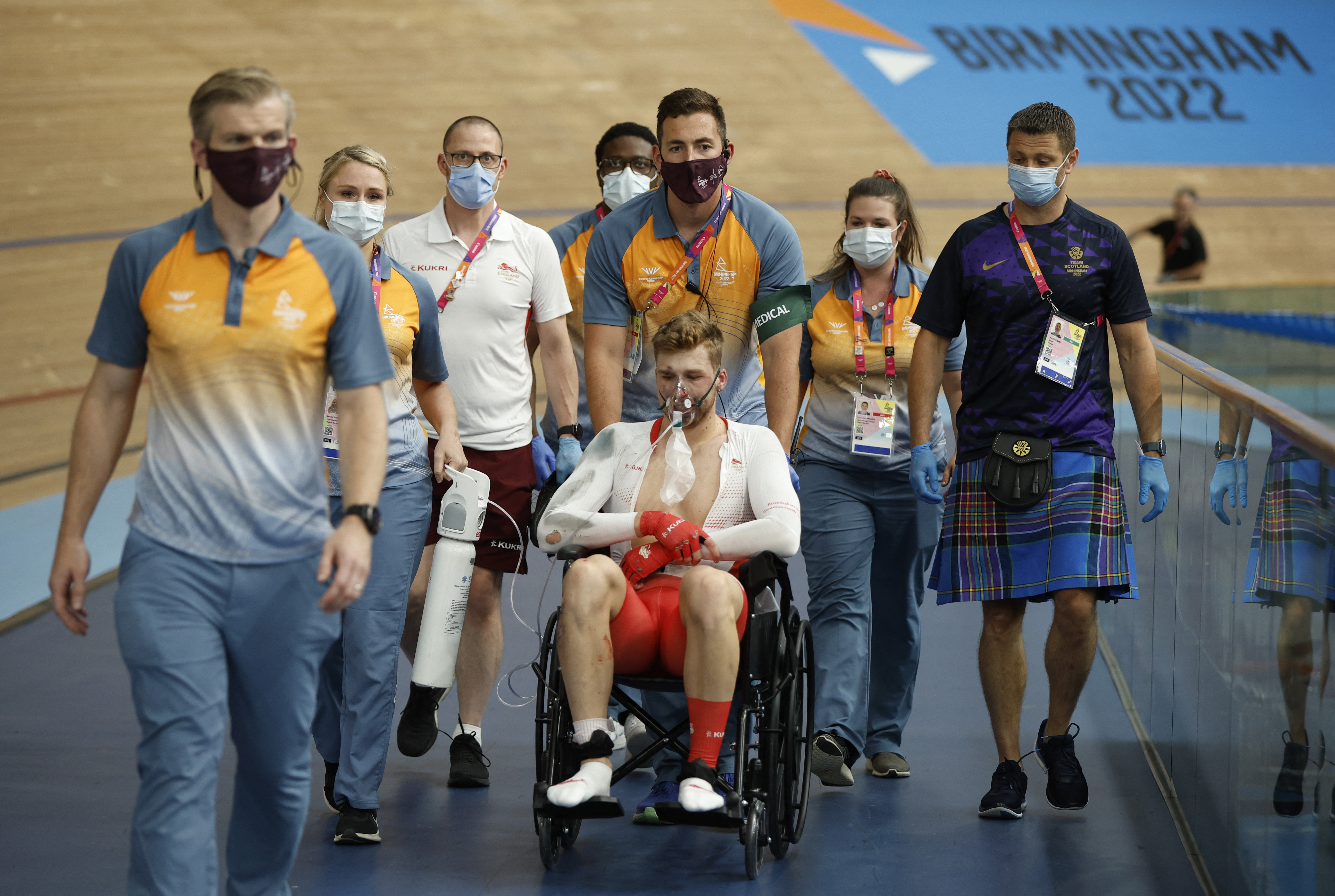 “I think the crashes are getting worse and it’s because the speeds are getting higher, the positions are getting more extreme,” explained Kenny. “Some of the pursuit positions people are getting in, you see people crashing into the back of people.”

India’s Meenakshi Meenakshi was left in need of medical attention after New Zealand’s Bryony Botha rode over her during a crash on Monday. The string of incidents highlight the danger of track cycling.

Kenny hoped for a reduction of the danger, stating, “at some point the UCI [Union Cycliste Internationale] are going to have to put a cap on these positions.”

She added, “maybe there should be screens because Matt [Walls] should not have been able to go over the top and into the crowd – that’s pretty damn dangerous.” 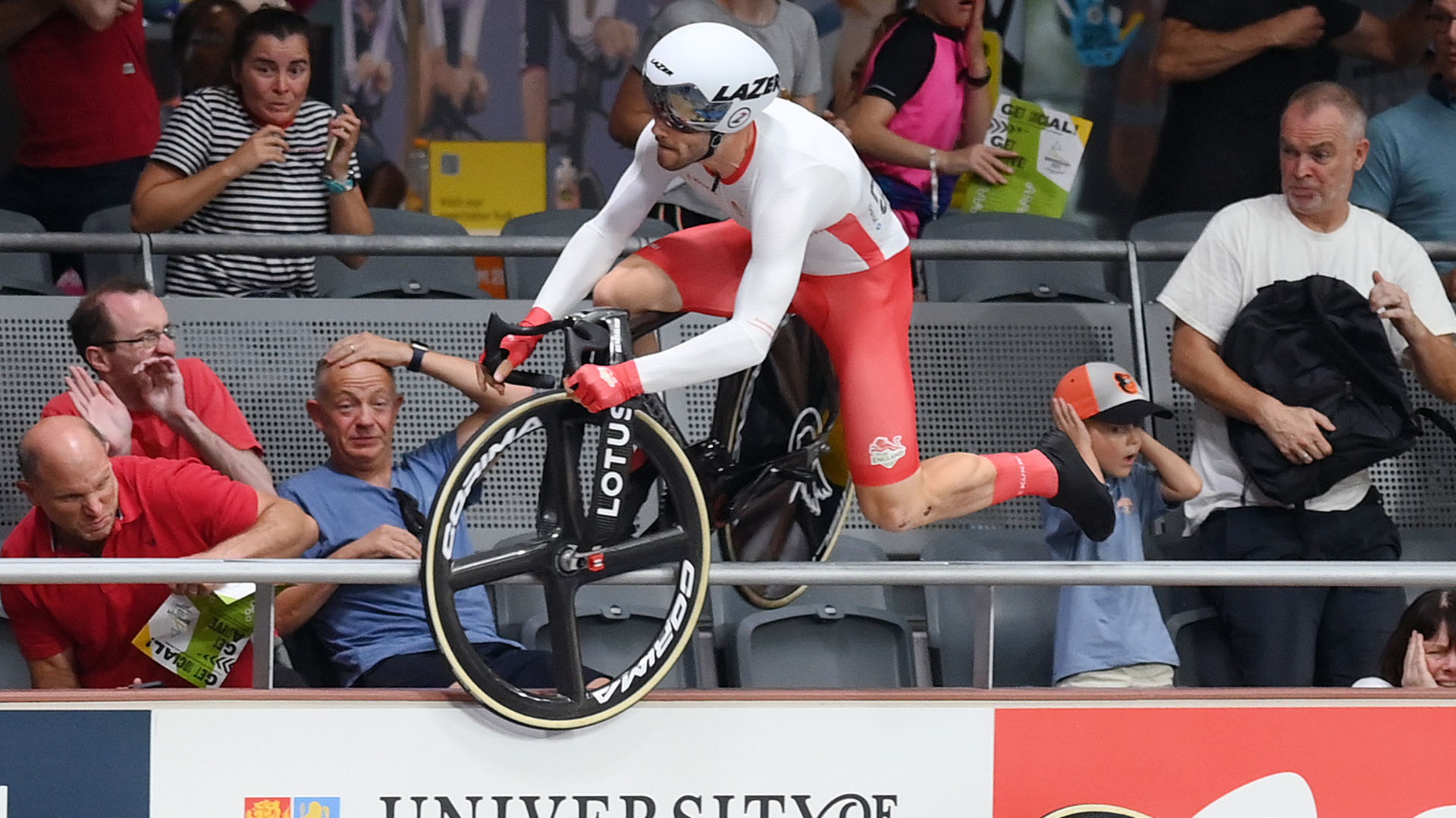 She said the dangerous nature of the sport was something riders were familiar with.

“When you’re not feeling physically fit enough to put yourself at the front of it, you wonder why you’re doing it. That’s the third time I’ve been in a velodrome and watched someone go over the top. Is the top of it too dangerous?”

A similar catastrophe was narrowly avoided during the Rio 2016 Summer Olympics.

Laurine van Riessen of the Netherlands was forced to ride off the track and onto the wall beneath the railing separating the track from spectator seating amidst a crash in the women’s keirin. She luckily emerged from the incident unscathed. 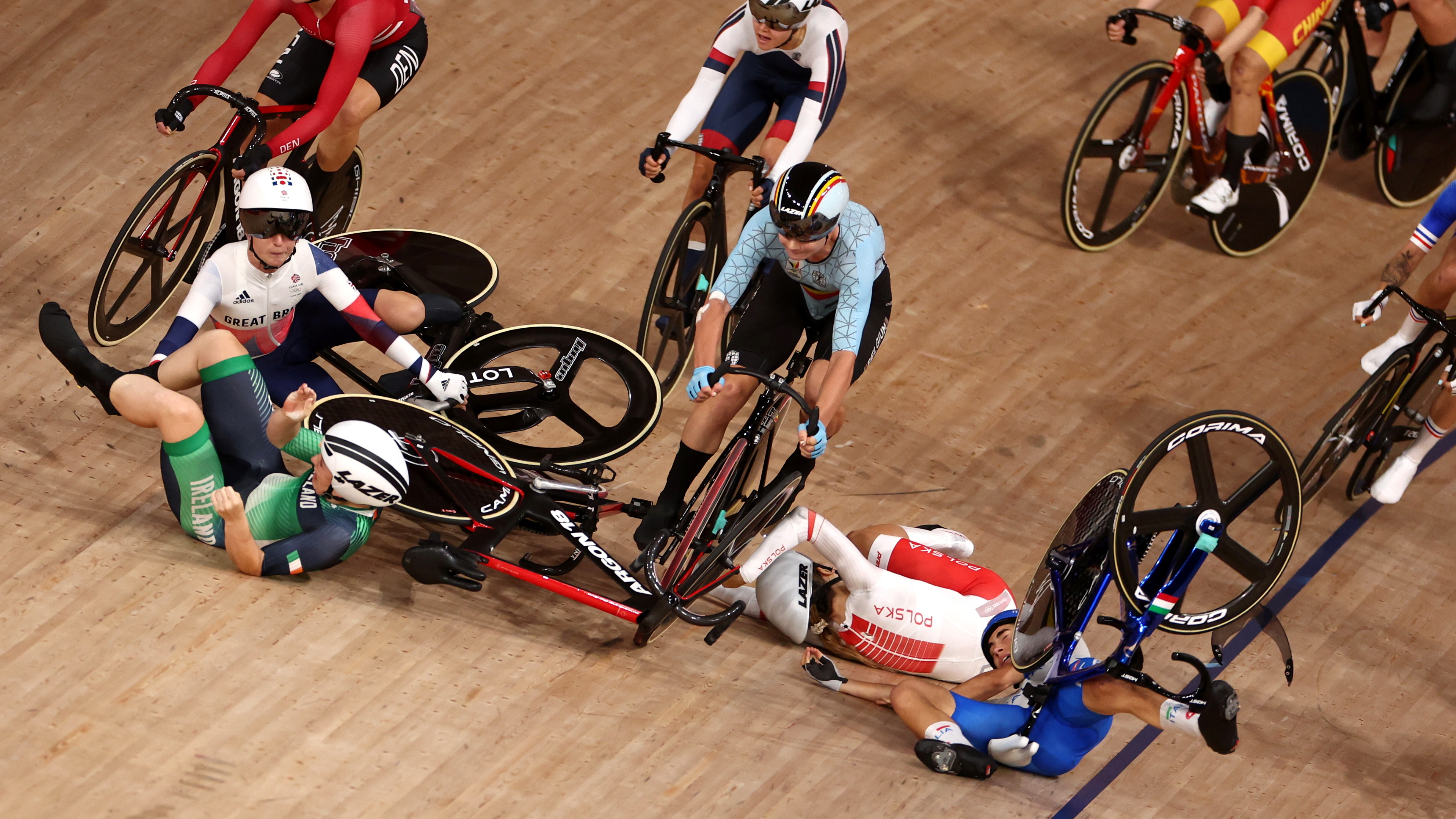 “It’s the third time now I’ve been in a velodrome and witnessed someone go over the top,” testified Kenny. “Matt was laughing and making jokes with the paramedics which is brilliant to hear but if he’d [not gone over] he would have done less damage and certainly done less damage to the little girl.”

It remains unclear if any additional safety measures will be implemented following the string of crashes at the 2022 Commonwealth Games.