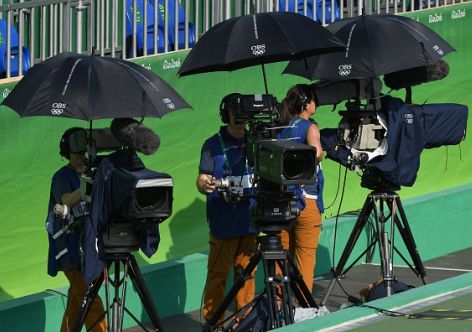 (ATR) The Olympic Channel can now add the title of rights holding broadcaster to its credentials, stepping in to deliver coverage of the Olympic Games in South Korea to countries around the India subcontinent.

Although not originally scheduled to become a rights holding broadcaster less than two years into its operations, the unique platform was perfectly suited to answer the call when no companies had bought broadcasting rights in India, Pakistan, Sri Lanka, Bangladesh, Bhutan, Maldives and Nepal prior to the PyeongChang 2018 Winter Games.

"That came about quite late but where markets haven’t been sold, we’re the option to have the Games’ live transmissions," Olympic Channel general manager Mark Parkman told Around the Rings in an exclusive interview in PyeongChang.

"We’re [broadcasting] it on www.OlympicChannel.com, we’re also doing it on YouTube in India and on Facebook. We are geo-blocked in those seven countries but we are a rights holder in certain parts of the world which has made it a different dynamic than even what we expected."

Parkman says the live feed comes straight from the Olympic Broadcasting Services but places a special emphasis on the athletes from that region.

Parkman says in countries where there are rights holding broadcast deals already in place, the Olympic Channel is being used as a supplement to Olympic coverage that can direct audiences back to the host broadcasters’ digital and television platforms.

The Olympic Channel has a team of about 70 people in PyeongChang for its first full Games since launching at the conclusion of Rio 2016. A large portion of the content they are producing while in PyeongChang will be used after the closing ceremony Feb. 25 when their rights to Games footage opens.

‘This is a fabulous portrayal of what the Czech team did," Parkman tells ATR. "Not only what it did for the country but it crosses borders as well because it’s such a great story."

Parkman says that more great stories are on the way after the debut in PyeongChang, with five planned this year.

"For us, this is a space that with our brand – the five rings, excellence, best-in-class – we wanted to create a series that was similar, a platform for all the great stories from the Olympics over 100 years.

"It’s a space that we want to be in, doing high quality production that our colleagues at HBO, ESPN and others have been very successful with. We think with our archives and the stories that have been told through the Olympics makes it a perfect space for us to be in."