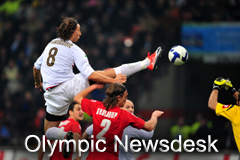 Momodou Dibba is the new president of the Gambia National Olympic Committee, elected Feb. 12 after his only opponent withdrew from the race.

Dibba is secretary general of the Gambia Football Federation.

Abdoulie Touray, the former secretary general of the NOC, withdrew from the contest after complaints about the eligibility of voters and the absence of delegates from some sports federations.

Dibba is calling for unity after months of dispute that has wracked the NOC since ex-president Lang Tombong Tamba was sentenced to death last year for his role in a coup attempt.

An election in October to replace Tamba was postponed because of disputes over procedures.

It remains to be seen whether Dibba’s call for unity will affect the theft charges filed against Gambian IOC member Beatrice Allen, who has served as interim president. Allen says those charges are politically motivated. She and another NOC official are charged with taking a little more than $1,000 from the NOC.

Argentina Fail to Qualify for London 2012

Reigning Olympic champions Argentina will not get the chance to defend their football title at London 2012 after Brazil and Uruguay secured the two South American qualifying places.

Brazil became the South America U-20 champions for the 11th time over the weekend to book their berth at the Olympic football tournament in London.

Runners-up Uruguay qualified for the Olympics for the first time in 84 years; the 1924 Games in Paris and 1928 Amsterdam Olympics were their only two previous appearances.

Argentina, the 2004 and 2008 Olympic football champions, could only come third at the U-20 tournament in Peru, dashing their hopes of defending their crown.

The 38-year-old qualified by beating four minutes 15 seconds in the 3,000m on Saturday at a minor event in her native Germany.

Pechstein, her country’s most successful Winter Olympian with nine medals, sat out Vancouver after the International Skating Union found her blood profile to show abnormal values at the World Allround Championships in 2009.

The Games would have been her sixth consecutive Winter Olympics. She medaled in each of her first five.

She is now in the midst of a years-long legal battle to gain eligibility for Sochi 2014. IOC rules prohibit any athlete banned for more than six months from competing in the next Olympic Games.

Switzerland's Federal Tribunal became the latest court to uphold the ISU’s suspension back in October, following similar rulings from the Court of Arbitration for Sport and Swiss Supreme Court. Pechstein is now appealing to the European Court of Human Rights.

The International Boxing Association is adding another incentive to encourage individual excellence in its team-oriented World Series of Boxing.

The world champs – boxers’ best shot at Olympic qualification – is slated for September in Baku, Azerbaijan.

In the meantime, five spots are up for grabs at the conclusion of WSB’s debut season. Team performance aside, the top two individuals in each weight category will fight May 27-28 for spots at the London Summer Games.

Olympic swimmer and future princess of Monaco Charlene Wittstock’s charity-driven participation in the Midmar Mile is but a footnote now that a man has been reported missing after Saturday’s open-water event in South Africa.

Nick Mellet of Johannesburg was last seen in a black Speedo and yellow cap, according to South African media.

Police began searching for the 45-year-old after the final swimmer crossed the finish line and Mellet’s race tag remained unregistered.

This incident comes less than four months after U.S. swimmer Fran Crippen’s death during a race in United Arab Emirates, the first-ever at a FINA event.