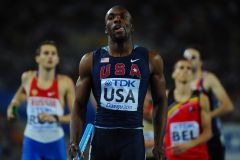 (ATR) The IOC says it is "surprised" and "disappointed" after the Court of Arbitration for Sport dismissed its doping eligibility rule. It clears the way for U.S. 400m star LaShawn Merritt to defend his Olympic title at next year's Games.

CAS today invalidated the IOC's controversial Rule 45, introduced ahead of the Beijing 2008 Games, that bars any athlete given a doping ban longer than six months from competing at the next winter or summer Olympics.

The decision allows Merritt and dozens of other former doping cheats to compete at London 2012. It also puts pressure on the British Olympic Association to scrap its lifetime Olympic ban on athletes convicted of doping such as sprinter Dwain Chambers.

CAS said in a statement: "The IOC Executive Board’s June 27, 2008 decision prohibiting athletes who have been suspended for more than six months for an anti-doping rule violation from participating in the next Olympic Games following the expiration of their suspension is invalid and unenforceable."

Reacting to the decision, the IOC said it "fully respects the Court of Arbitration for Sport and will of course abide by its judgment".

"The IOC has a zero tolerance against doping and has shown and continues to show its determination to catch cheats," the statement added.

"We are therefore naturally disappointed since the measure was originally adopted to support the values that underpin the Olympic Movement and to protect the huge majority of athletes who compete fairly."

"The rule was in our view an efficient means to advance the fight against doping, and we were somewhat surprised by the judgment since we had taken an advisory opinion from CAS on the rule and been given a positive response."

The IOC pledged to review Rule 45, also known as the "Osaka Rule", in the future.

"When the moment comes for the revision of the World Anti-Doping Code we will ensure that tougher sanctions, including such a rule, will be seriously considered," said the statement.

Merritt was slapped with a 21-month suspension last year after testing positive for a banned substance said to have been found in a male enhancement product. His ban ended in July and he returned to the track to claim silver in the 400m and gold in the 4x400m relay at the Daegu IAAF world athletics championships in August.

The American and the United States Olympic Committee (USOC) felt that an additional ban from the London 2012 Olympics went beyond World Anti-Doping Agency sanctions which stipulate a maximum two-year ban.

The USOC released a statement that attempted to soften the blow of the CAS ruling, as it continues its quest to rebuild relations with the IOC. The USOC and IOC are expected to settle their revenue-sharing dispute in the coming weeks.

"On behalf of the U.S. Olympic Committee, I'd like to thank the IOC for their willingness to participate in this process," said USOC CEO Scott Blackmun.

"This proceeding was handled with respect and professionalism from the outset as both parties sought clarity on the rule.

"Like the IOC, we are in full support of clean competition and stringent anti-doping penalties. This decision does not diminish our commitment to the fight against doping, but rather ensures that athletes and National Olympic Committees have certainty as they prepare for London."

The British Olympic Association told Around the Rings it was currently assessing the CAS verdict and possible repercussions for its lifetime Olympic ban bylaw.

BOA chairman Colin Moynihan will comment on the CAS ruling at a press conference later today.