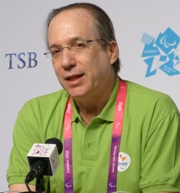 Rio 2016 CEO Leonardo Gryner will speak at the 7th International Sports Event Management Conference on the planning of the Games.

Gryner will join the conference via video presentation to discuss insights gained from London 2012 as well as how Rio 2016 will apply them to their Olympic and Paralympic planning.

The dates for the 3rd annual African Football Executive Confex are April 17 and 18 inJohannesburg, South Africa.

The theme for this year’s CITYEvents conference will be "Preparing to bid, and bidding to win."

The conference will sport speakers from national, regional and city public sectors as well as international sports federations, event organizers and other key stakeholders.

Speakers will also represent a wide variety of successful – and unsuccessful – bids, sharing the lessons learned from each.

The cities of London, Kazan and Stockholm are a few of the speakers slated for the three-day conference.

Meanwhile, voting is open for the inaugural Sports Cities Index, presented by Around the Rings and TSE Consulting.

Though the initial batch is already set, it’s up to the public to help sort them out 1 through 50 based on their perceptions of the cities as having hosted major events, having quality facilities and being healthy and active places to live.

An online survey open through Nov. 11 asks respondents four brief questions on those themes and then gives them the opportunity to suggest other cities for inclusion in future editions.

A group of 100 "TSE Survey Experts" drawn from international federations, National Olympic Committees, sports media and other influencers will also respond to the survey.

Answers from these experts will be combined with those from the general public to produce the final Sports Cities Index, to be released at CITYEvents, scheduled for Nov. 14 to 16 in Lausanne.

Aspire4Sport’s 3rd conference will focus on "Connecting business and sport in the Middle East."

The conference will welcome more than 3,000 delegates, including 500 sports industry leaders and 250 accredited media professionals at Doha’s Aspire Dome.

Former legends from Real Madrid and Barcelona FC will participate in an "El Classico" exhibition match on Nov. 13.

Three unique conference programs "Aspire Med," "Aspire Tech," and "Aspire Build" will drive the content of the conference, scheduled for Nov. 12 to 15 in Doha.